Most Thai fighters start from a very young age, retiring by the time they reach their 20s or 30s. Nareepas ‘Patty’ Supapitakpong is the complete opposite. A 47-year-old business owner and mother of four, she dipped her toe into Muay Thai for the first time in January this year. Just a few months later, she had her first fight, winning against an opponent who was more than 20 years younger than her.

Patty’s family has always been interested in martial arts, with her children training Karate and Judo. However, Muay Thai didn’t appeal to them before. Until recently, the Supapitakpongs had assumed it was a dangerous, risky sport that was only for men. When Patty enrolled in a course at Rangsit Stadium’s Muay Thai Institute, all that changed.

She took the course as a way to keep fit and to introduce her children to Muay Thai, and quickly began to see the benefits. “I feel fitter than I did when I was 15. I’ve lost 10kg and my muscles are more beautiful than they were when I was weight training”, she told me. As part of the course, all students are required to have at least two professional fights. Patty wasn’t at all fazed by this and grabbed the opportunity with both hands. “If you train with the right instructor, anyone can do it”, she said.

She has four children; three boys, aged 20, 18, and 17; and a girl, aged 15. Her kids take pride in having a Muay Thai-fighting mother and are excited to see her in the ring. Now, they even plan to follow in her footsteps by taking up fighting themselves.

Patty, her husband and their four children training together.

Outside of Muay Thai, Patty runs her own printing business with her husband, which means she can fit her work schedule around her training. When she’s preparing for a fight, she trains twice a day, six days a week, bringing a notebook to the gym so that she can calculate quotations for her customers and delegate tasks to her employees between sessions. During these times, her husband takes care of most of the household chores.

When asked if she feels scared or nervous before fights, she responded with a firm “no”. “I believe in my instructors and I train very hard”, she added. The age difference doesn’t bother her, either. As long as she and her opponent are the same weight and have similar levels of experience, she feels confident. 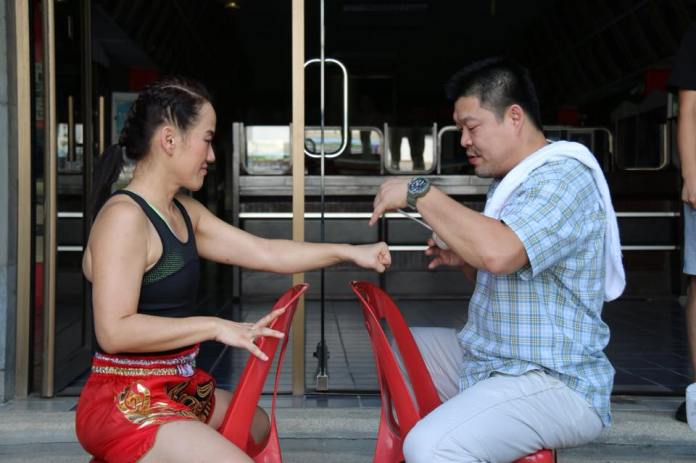 Last night, Patty had her second fight against 16-year-old Sueadam Sit. Pukong Deang. It went as well as her first, with her winning by TKO in the third round.

After completing the two fights required for her course, she doesn’t plan to stop. In fact, she already has an opponent lined up for her next fight. Be-Bar Sor. Sutee will be the next person to step into the ring with her.

Patty’s plans for Muay Thai don’t stop at fighting. Next, she wants to take the Muay Thai Institute’s instructor course so that she can teach other women. “I plan to open a gym to train women in the future, for fitness and self-defense”, she says.

Patty has the following message for anyone who thinks they’re too old for Muay Thai: “Everybody can start step-by-step, train hard and be safe and be fit. Muay Thai can make you feel healthier, stronger and younger than you can ever imagine”.

When asked about prospects for female fighters and trainers in Muay Thai, she says she feels that “there are no limitations”.

“I hope to inspire other ladies”, she says. I have a feeling she will.