Wang Saen Suk is a temple garden filled with grotesque statues depicting the tortures you can expect to endure in hell if you commit various sins in life. This may not sound like the ideal day out for some, but I’m all about seeing new and weird things (which is why I also visited the Siriraj Medical Museum, which houses the body of Thailand’s most famous serial killer). I paid it a visit during my vacation and found it really interesting. Here’s what I made of it.

As you walk into the garden, you see two giant, emaciated figures with protruding stomachs and long tongues. They are the ‘praet’ เปรต or ‘hungry ghosts’. As a result of the sins committed in their previous lives, they now suffer from eternal and insatiable hunger. One of the ghosts in female, and a plaque at her feet reads ‘the ghost named Nang Thong. Nang Thong was a woman who did some mistakes of sexual intercourse, misconduct, mind without morality. After dead she became this ghost‘. The male ghost was described as Nai Ngean. ‘Nai Ngean was a man who did some mistakes of the five precepts, like a vice, disorderly conduct and after dead he became this ghost‘. Obviously there are some translation issues here, but you get the idea. The five precepts mentioned are as follows:

Below the hungry ghosts is a boiling pot, filled with people who are being cooked while what appear to be guards stab them with spears. This pretty much sets the seen for everything else you’ll see as you venture further into the garden.

Surrounding hungry ghosts are lots of human figures with the heads of different animals. Plaques below them say that each animal head represents a spirit assigned to different sins.  There are more than 20 of them, so to save you having to click through all of the pictures, I’ve listed the meaning of each of them below.

Having sex with ‘unpermitted persons’  = spirit of the chicken

Exploiting others = spirit of the dog

Corruption = spirit of the pig

Destroying the property or belongings of others = spirit of the rat

Destroying wildlife = spirit of the deer

Selling drugs = spirit of the cow

Undermining the authority or duty of others = spirit of the tortoise

Jealousy = spirit of the rabbit

Encouraging others to fight = spirit of the duck

Arson = spirit of the snake

Being ‘dishonest to your duties’ = spirit of the toad

Playing jokes on others = spirit of the snake

Taking drugs = Spirit of the crustacean

Abandoning your duties because of gambling = spirit of the horse

Destroy protected or reserved wildlife = spirit of the elephant 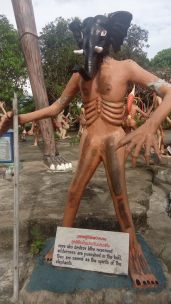 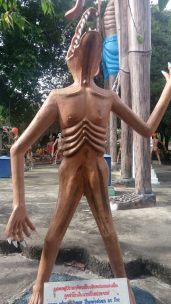 The animal spirit images were pretty tame compared to the rest of the garden, which was full of graphic torture scenes, giving warnings of what happens to those who violate the five moral precepts. If you violate the first one, you’ll be subjected to this. 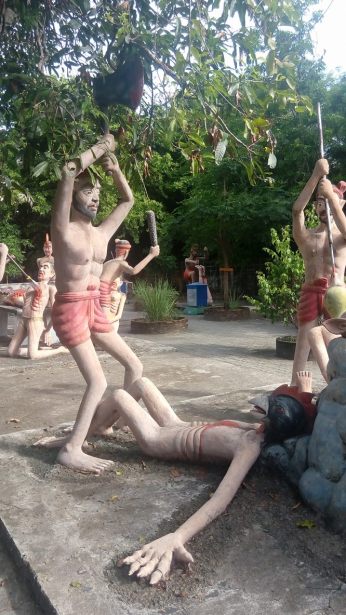 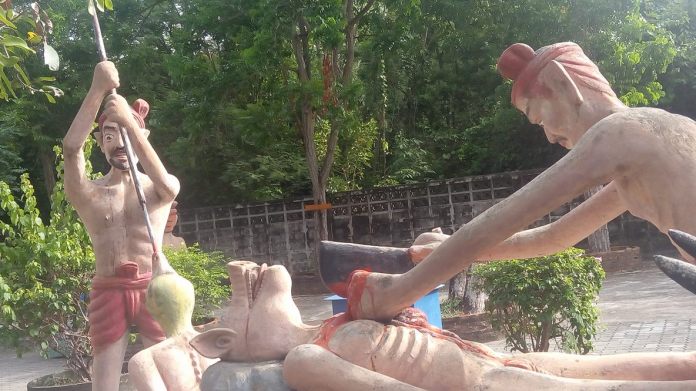 For stealing and therefore violating the second precept, you’ll be sawn in half. 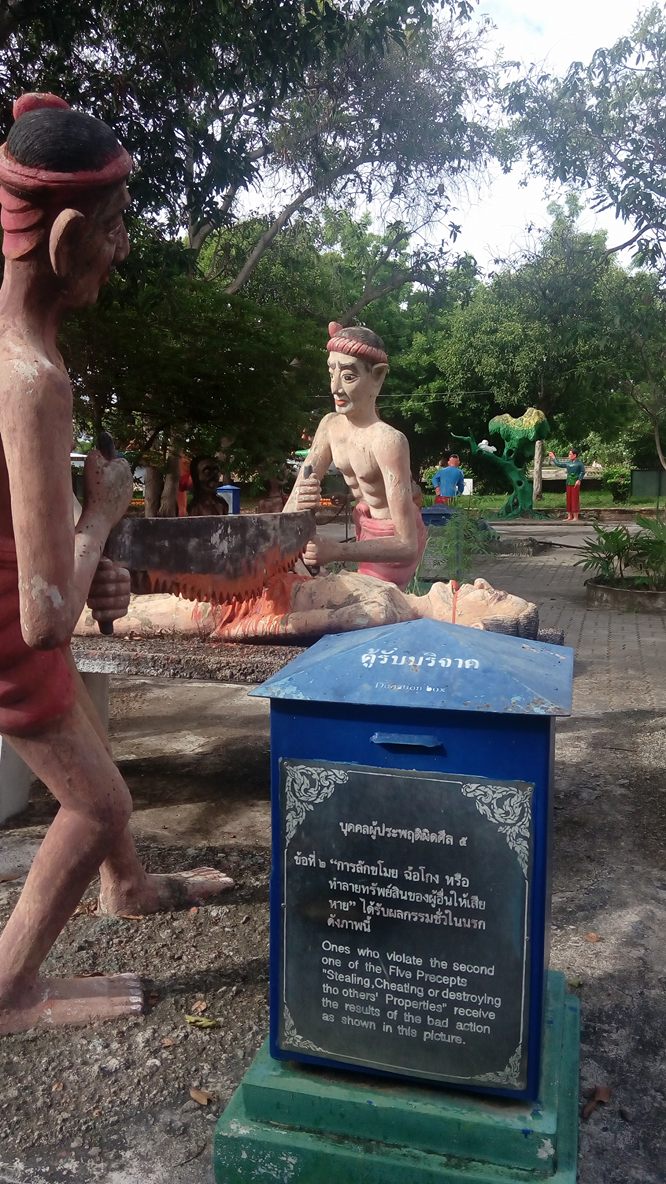 The punishment for committing sexual misconduct or ‘being paramour with others wives or husbands‘, which is the given description, looks particularly unpleasant. It shows people climbing some kind of spiky tree while naked, being chased by dogs, pecked at by birds and stabbed by some other guys. Eesh.

For violating the fourth of the five precepts, ‘telling lies’, you’ll be stabbed with a spear, too (there’s lots of stabbing going on in Buddhist Hell, apparently).

Those who violated the final precept, drinking or taking drugs, seem to be undergoing some kind of force feeding. There were also some statues of some cracked-out looking people with long tongues, and a guy with one eye falling out smoking a pipe. 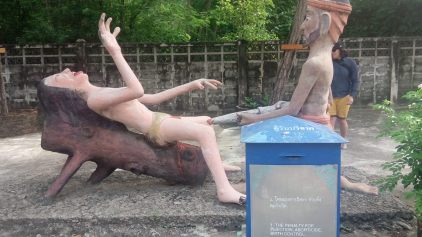 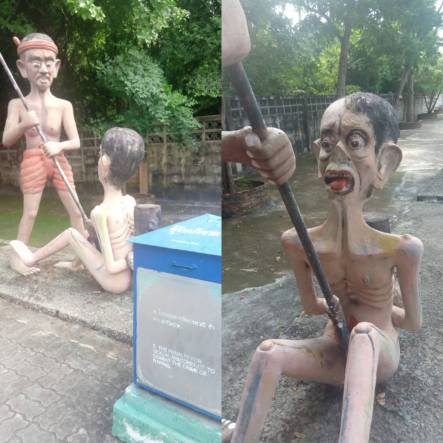 The most gruesome one was the punishment for having an abortion, which looks like something out of a Saw movie. I’ll let the picture speak for itself.

The garden also gives an unexpected lesson in Thai idioms, as there’s a whole section of statues to illustrate them. I guess this is the area dedicated to teaching good morals without the gore. Their descriptions were only given in Thai, and while there were some I was already familiar with, lots of them were new to me, so I asked some of my Thai co-workers to help explain them to me. Below is a photo of each one with the idiom in Thai script, followed by the direct translation and then the meaning or equivalent idiom in English. 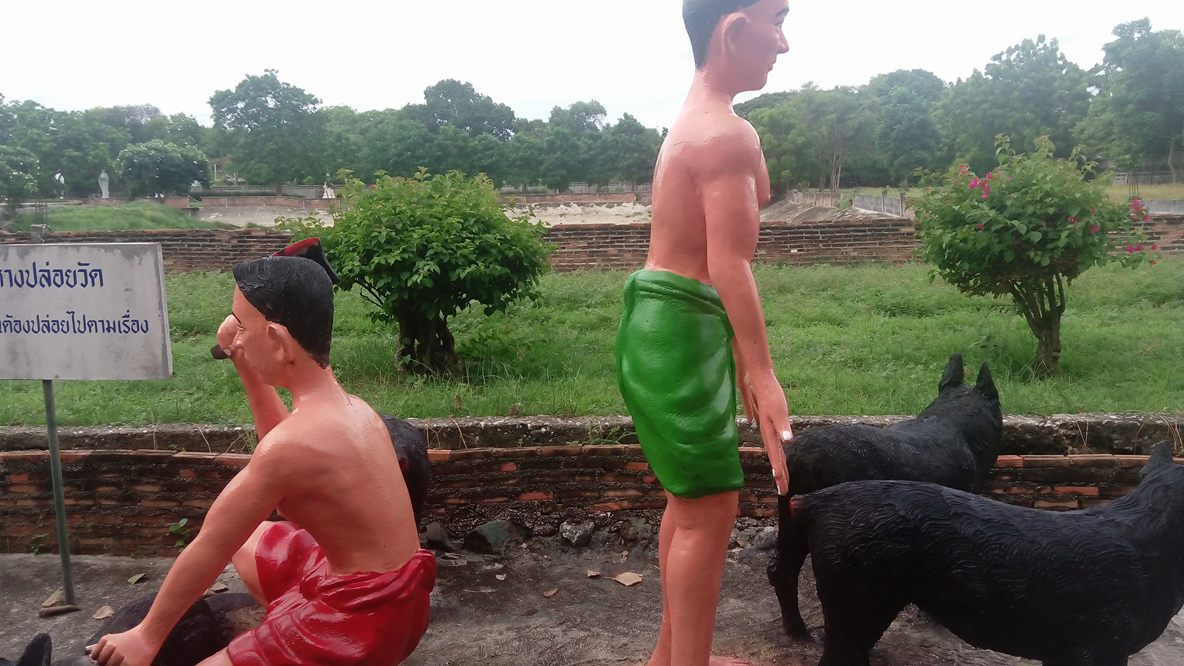 ตัดหางปล่อยวัด – Cut one’s tail and abandon them at the temple – To  cease to take care of someone or something. Can be used for animals or children 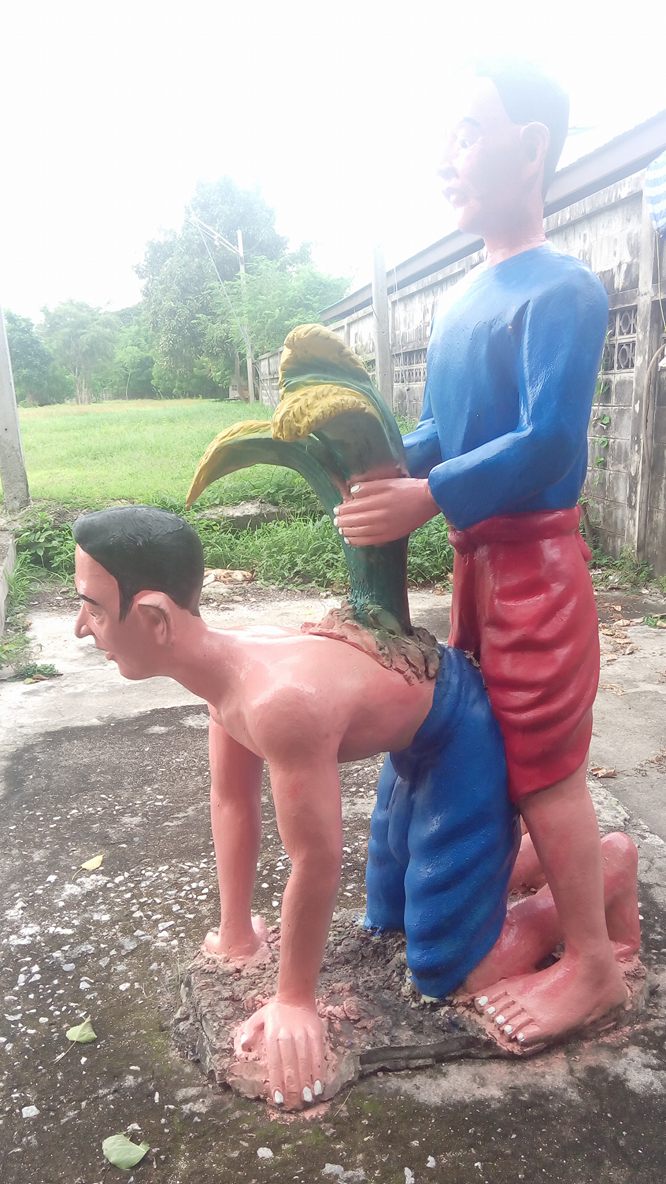 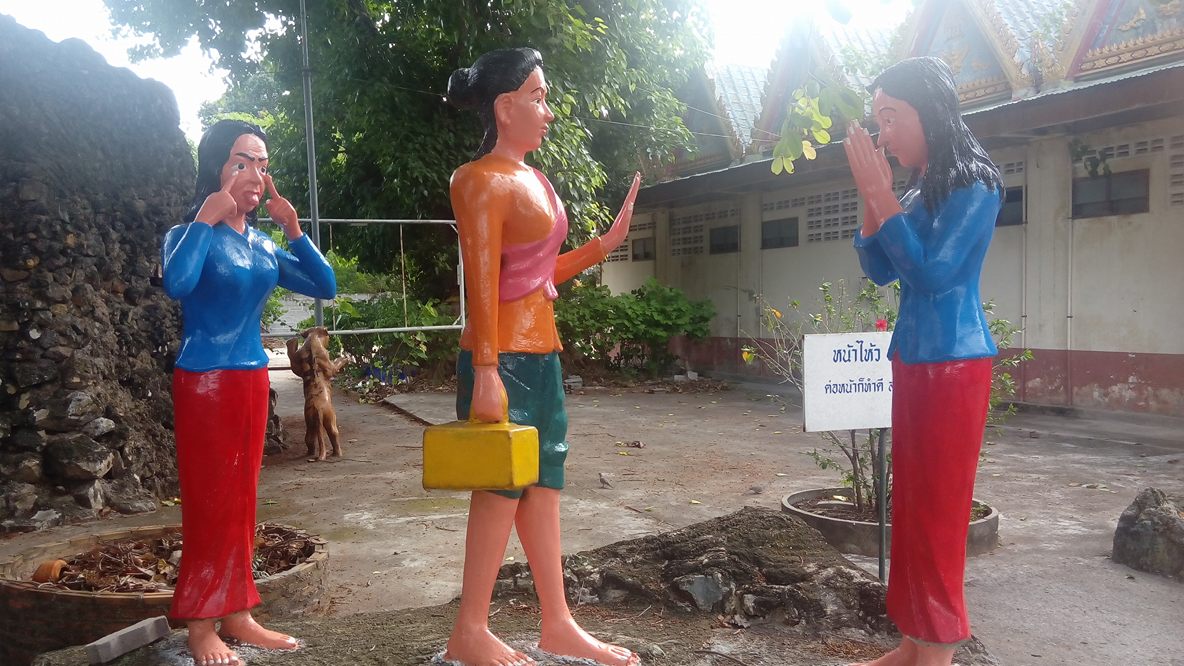 น้ำท่วมปาก – Mouth flooded with water – To have a secret to tell but be unable to speak because it may be dangerous or hurtful to others.

จุดใต้ตำตอ – To set a tree stump alight – To not see something that’s right in front of you, i.e. when you’re looking for your phone only to realise it was in your hand the whole time.

คางคกขึ้นวอ – A toad on a palanquin – Someone who’s somewhere they don’t belong, i.e. a lower class person trying to be ‘hi-so’. An animal such as a toad should be on the ground, while a palanquin is for royalty. 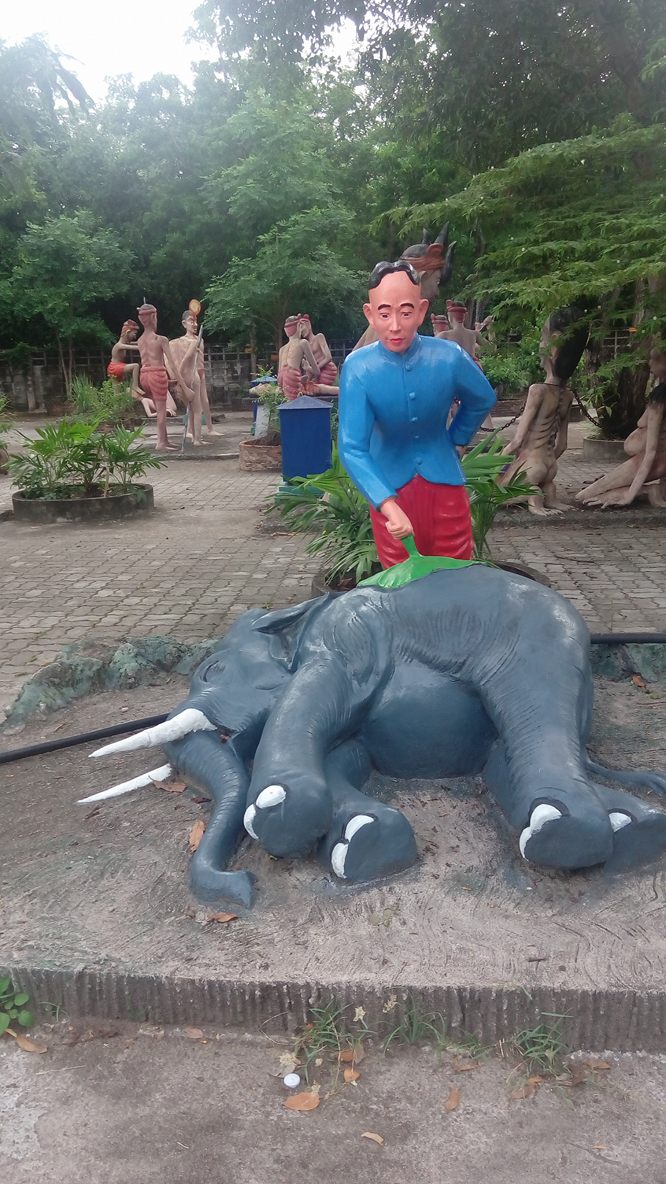 ช้างตายทั้งตัว เอาใบบัวปิดไม่มิ – You can’t hide a dead elephant under a lotus leaf – What is done at night appears by day. The truth will come out eventually.

As you can see, Wang Saen Suk is a delightful day out. While it is pretty weird, it’s actually not the only place of its kind in Thailand. There’s Wat Mae Kaet Noi in Chiang Mai, Wat Phai Rong Wua in Suphanburi, Wat Pa Non Sawan and Wat Pha Thewaphitak in Roi Et, Wat Pha Lak Roy in Nakhon Ratchasima, and I’m sure there are others. So if you’re a real weirdo, you can hit up all of them on a hell temple tour of Thailand.

How to get there

Wang Saen Suk is located in Chon Buri, which is between Bangkok and Pattaya. From Bangkok, you can take a bus from the Eastern Bus Terminal at Ekkamai BTS station for around 70 baht. Let the driver know that you want to go to Wang Saen Suk and he’ll drop you on a main road where you can hop in a songtaew straight there. You can bargain with the songtaew driver, but in my case, it was 50 baht.