In October 2014, the ‘Angel Fight Extreme‘ event took place. It was the second show by World Muay Thai Angels, an all-female fight promotion and the first of its kind in Thailand.

Their first event was an international 16-woman tournament at 57kg earlier that year, which ended with Chomannee Sor. Tehirun being awarded the 1 million baht cash prize and a brand new Toyota Vios. This was the biggest prize ever awarded to a female fighter in Thailand, where it’s not uncommon for a female to be paid less than a male fighter for fighting on the very same show. The show also featured female referees, which was a refreshing change. 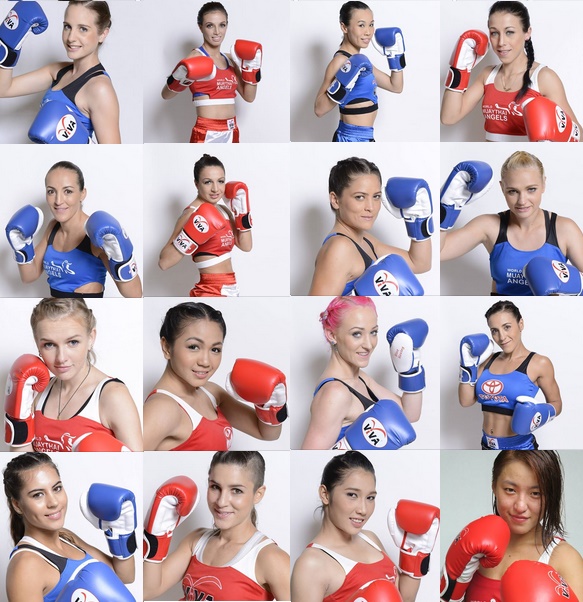 When the tournament was first announced, it was advertised on Facebook with the following caption:

It’s uncomfortable enough that the fighters’ looks need to be used as a selling point at all, but for this to be the primary focus was disappointing. Have you ever heard of a men’s Muay Thai event being advertised for having good-looking fighters? Clearly, the promotion was attempting to capitalize on a unique selling point that no other Muay Thai promotion had to offer, but it felt patronizing and to some degree, even more limiting.

As female fighters, we’re constantly battling stereotypes while as being judged or valued by our looks. Rather than trying to break those barriers, it seemed that World Muay Thai Angels was actually reinforcing them. On the other hand, one unfortunate stereotype of female fighters is that they are mostly ‘butch’ or ‘look like men’, and perhaps World Muay Thai Angels was challenging this misconception by showcasing the beauty and perceived ‘femininity’ of their fighters. However, if the promoters truly want to break boundaries, they should make the show all-inclusive and open to any woman, regardless of her appearance. All female fighters should have the opportunity to fight on a platform like this.

Sadly, this show managed to showcase female fighters while simultaneously reducing them to their looks. To me, that didn’t feel like progress.

The lead-up to the first World Muay Thai Angels show was preceded by the Miss Muay Siam beauty contest, which took place on 21st August, 2013.

Muay Siam is Thailand’s main Muay Thai newspaper and the event was organized to promote its 27th anniversary. Both events seemed to come under the umbrella of ‘Sud Suay Muay Thai’ which translates to ‘the most beautiful Muay Thai‘. After watching and translating a commercial for Sud Suay Muay Thai, Sylvie von Duuglas-Ittu wrote The Beauties of Muay Thai – Female Muay Thai Image, Culture and Market, which gives more detail about its meaning. She wrote that ‘the beauties of Muay Thai‘ was more accurate, as the focus is beautiful women doing Muay Thai, rather than women displaying beautiful Muay Thai, and there is a distinct difference between the two. The existence of Sud Suay Muay Thai is certainly progression of some sort, but in what direction?

Along with this clip, Sud Suay Muay Thai aired a series of 1-minute episodes on Channel 7. There was one episode on Sawsing Sor. Sopit and another on Chomannee Sor. Tehiran. It seemed as though they were going to air one for each contestant in the Miss Muay Siam contest, but no further episodes ever surfaced.

The event involved having them dressed in outfits that were personalised versions of Muay Thai gear. They wore Muay Thai shorts with long, flowing skirts attached to them, sequins, glitter, high heels, finished off with lots of make up and hairspray. It seemed to function as any other Thai beauty pageant would, whereby each member of the audience had to give flowers to the candidate that they perceived as ‘the most beautiful’ and the one who’d collected the most flowers at the end was crowned ‘Miss Muay Siam’. She was also given a belt to signify her title.

The winner was Peach Purahong. After being crowned, she made several TV appearances and fought on the Max Muay Thai show, in the promotion’s first-ever female bout (although the stadium only ever held 2 women’s fights after that before becoming a men’s-only promotion). She also featured in the Muay Thai Angels shows, firstly as a referee and then as a fighter. Clearly, the title of ‘Miss Muay Siam’ has helped Peach’s career.

The Problem with Beauty Pageants

The idea of beauty pageants has always made me uncomfortable.

John Oliver’s episode of Last Week Tonight, which brilliantly tore apart the Miss America contest, pretty much nailed my thoughts on competitions like these. He opens by questioning its very existence, asking ”how the fuck is this still happening?” It’s just started to happen in Muay Thai, and while Miss Muay Siam isn’t quite Miss America, the principle is the same.

The idea of women having to parade for the purpose of being judged solely on their physical appearance is unsettling on its own, but for Muay Thai fighters, even more so.

Couldn’t these fighters have been celebrated without being objectified? The Miss Muay Siam contest may have had positive intentions of promoting female fighters, but ended up reinforcing negative and oppressive ideas about them at the same time.

These fighters were being openly judged for their outer beauty in lieu of their skills or abilities as fighters, even by an association that exists for the purpose of promoting Muay Thai.

Smile for the Camera

Along with the contest, there was a photo shoot for a Miss Muay Siam 2014 calendar, which was available in a special edition of Muay Siam Extra.

The following year’s calendar featured Chommanee alone, as she was propelled into the spotlight since winning the Muay Thai Angels tournament, making lots of TV appearances. It was great to see her get the recognition she deserved, as she’s an excellent fighter. However, some of the calendar shots were a little strange.

In some photos, she was in Muay Thai shorts and handwraps, posing with her fists clenched; in others, she wore shorts and a sports bra, striking some softer poses with her hands behind her back or on her hips. In one bizarre shot, she was on all fours.

Promotion for the most recent World Muay Thai Angels show, Angel Fight Extreme, involved glamour-style photoshoots similar to the ones for Miss Muay Siam, where the fighters were given stylists and hair and make-up artists who dolled them up in prom dresses and heels.

Kelly Creegan, an Irish fighter who fought on the most recent Muay Thai Angels show, ‘Angel Fight Extreme’, wrote a blog post about her experience of the shoot. She says that she was told to look “innocent, angelic and naive” and that Duannappa, one of the Thai fighters on the promotion, was styled as “a sexy school girl”. She wrote about how the Thai fighters seemed to have more personalised outfits, whereas the foreign fighters were put in “random, girly dresses”. You can see the end result in the poster below.

The Thai fighters displayed more variety in their styles. Saifaah wore a baggy, hip-hop-inspired outfit with a beanie had and chain necklace, while Peach (Kelly’s opponent) wore a leather jacket with black leggings and dark, smokey-eye make up. Perhaps they just didn’t know what to do with the foreign fighters as they weren’t as familiar with them or their personalities.

The video below is a behind-the-scenes look at the fighter photoshoot for the second World Muay Thai Angels in 2017.

It was a pleasant surprise that Angel Fight Extreme included Lommanee Sor. Hirun (otherwise known as Chalarmnoi), who is described as a ‘tom‘ and doesn’t conform to the strict beauty ideals Muay thai Angels previously adhered to. This representation showed that the crack in the doorway that the promotion had first opened was beginning to widen.

Having seen the previous photoshoots, I was concerned that Lommanee would have to adhere to the awkward, beauty-queen-style image that had been given to many of the other fighters. Surprisingly, this was not the case. In fact, Lommanee was put in a dapper suit, tie and shoes combo. Sylvie von Duuglas-Ittu wrote more about this in ‘Lommanee Tom Female Beauty – Muay Thai Angels Shows Support‘. It was wonderful to see that Lommanee was allowed to project her own form of beauty. Hopefully, there will be more of this to come in their future shows. If fighters have to be marketed on their appearance on this promotion, they should at least be able to choose it for themselves.

Left: Lommanee, Right: Her in comparison to the other Thai fighters on the show

Collectively, all of the recent, highly-publicized promotion of female Muay Thai has been beauty-focused. As a fighter, I find this disappointing, because I just want to be recognized for the way I fight and I resent the idea that how I look should have anything to do with that.

While beauty-focused promotion is still promotion, and it does seem to be having at least some positive effect on female Muay Thai in Thailand, I wish progress didn’t have to come at the cost of so much gendered bullshit.

Niamh Griffin wrote about this in her post, ‘Muay Thai Angels, A Step Forwards or Backwards?‘ which includes the following quote by writer Joe Cummings after he attended one of the shows. “I was skeptical going in but I think it’s a novel approach that works”, he said. “It’s reaching an audience that had a hard time accepting female Muay Thai fighters, including a lot of women, who are being pulled in by the beauty side of it and then are held by the athleticism”.

In ‘Muay Ying in Thailand: Is the Glass Half-Empty or Half-Full?‘, Melissa Ray described Muay Thai Angels as “PC? No. Appealing to the public? Yes“. She also included a quote from one of the tournament’s fighters, Teresa Wintermyr. “I think the beauty concept of the promotion is what made it so popular in Thailand, which would probably be a bit politically incorrect in many other countries but in Thailand it certainly works this way”, she said. “I think it was necessary in order to reach a bigger audience and not just the regular Muay Thai followers”.

This style of promotion seems to be part of an attempt to change the image of Muay Thai in Thailand from a sport that is often viewed as a ‘low-class’ to a form of fitness training that appeals to the middle and upper classes. This idea has clear had an impact, as new, fitness-focused Muay Thai gyms are opening up and enjoying success. Some traditional Muay Thai gyms have even been forced to rebrand to appeal to the fitness market. You can read more about that in Gender and Class – Muay Thai for the Masses by Sylvie von Duuglas-Ittu. This modernization of Muay Thai is also displayed by the existence of the new Lumpini stadium.

While I’m genuinely excited that things are happening for women’s Muay Thai in Thailand, I resent the fact that fighters have to be ‘glammed-up’ and literally judged on their looks for this to happen. Female fighters should be promoted just as male fighters are, and appearances should be irrelevant. At the moment, that clearly isn’t the case. The existence of World Muay Thai Angels and Sud Suay Muay Thai show that efforts are being made to push female Muay Thai to a wider audience in Thailand, but at the moment, it’s unclear who all this is for. We’ve got a long, long way to go.

The First Women’s Fights at Lumpini: How We Got Here and What’s Next