Those who’ve followed my blog for some time might already be aware of my previous struggles with groin guards. Three years ago, I wrote this post out of despair. After being forced to wear an awful communal groin guard for a stadium fight, I went on the hunt for my own so that I’d never have to have that uncomfortable experience ever again. To my dismay, the only thing I could find was the FBT guard you see pictured below, which was the same thing they’d made me wear at the stadium. I think we can all agree that it’s rubbish. For a start, even with my shorts on over it, it looked like I was wearing a diaper. It was also rather bulky, and I was conscious of it throughout the fight, which made it difficult to relax. Also, it was just filled with soft padding, so didn’t provide adequate protection at all. It generally felt restricting and not helpful at all. It’s not even adjustable, and only comes in one size! Terrible.

Those struggles are now over because I’ve discovered Lo-Bloo, a Swedish company that has come to the aid of female fighters everywhere by creating the first women’s groin guard that actually works. And it works very well. It’s called Aero Slim. I’ve had mine for a couple of months and now that I’ve spent some time sparring in it and wearing it for a couple of fights, I want to share it in all its glory with the rest of you. Sylvie Von Duuglas-Ittu also has one and loves it, too. You can read her detailed review here. LoBloo also have men’s and junior models, and I’m also going to review their Aero Fit model for men, with Tu’s help.

There are lots of things I love about the Lo-Bloo design, but the one that makes it stand out from other standard groin guards is that you don’t require any assistance when putting it on or taking it off. With the normal Thai cups, you usually need someone to help tie and untie the string at the back for you. A string that runs right up your crack, no less. Thankfully, Lo-Bloo have eradicated the need for such torture. All of their models slip on and off very easily, just as a pair of shorts do. When you first but the Lo-Bloo together, you adjust the straps to the right size, and then it’s done. They stay where they are and don’t need adjusting between uses. See the video below for how a Lo-Bloo fits and how to assemble and adjust it.

Lo-Bloo have clearly put a lot of thought into the ergonomics of their groin guards. The Areo Slim has a contoured design, so it fits snugly to the natural curves of the body instead of just being slapped on top of them (I’m looking at you, FBT). It doesn’t run into the thighs at all, so you can stretch, kick and run without any restriction of movement at all. In fact, it’s so discreet that you can easily forget that you’re wearing it The straps sit securely around the waist and legs without causing any discomfort or restriction of movement at all. the Aero Fit has a soft silicone lining around the edge, which stops the guard from digging into the skin and reduces the impact of any shots taken. Another interesting feature of the Aero Fit is a little shelf which is placed on the inside, just above the bottom corner. Your ‘junk’ sits on that shelf, which stops it from getting pinched at the bottom of the guard. 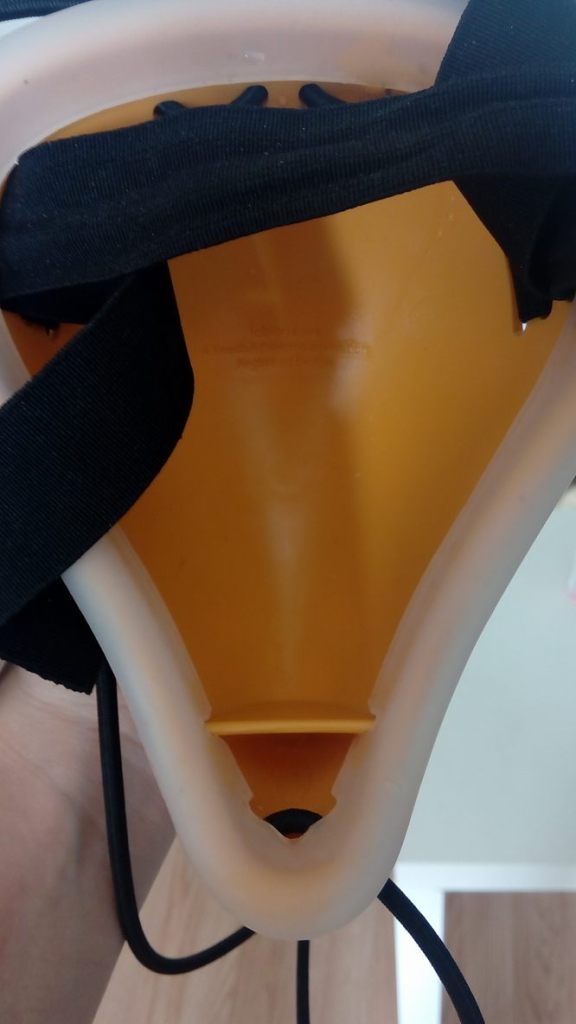 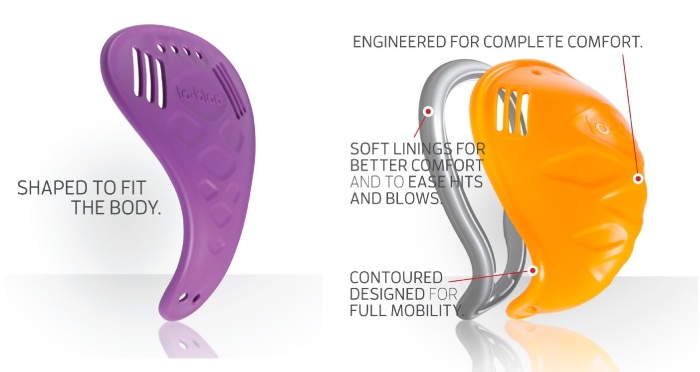 Once you’ve put the Lo-Bloo on, it doesn’t move. When assembled as shown in the instructional video above, the straps lock into place, so there’s no adjusting or having to jiggle it around during a fight. You can just get on with what you’re doing and forget about it.

Lo-Bloo’s groin guards are made from polycarbonate, which is a highly impact-resistant, strong and stiff thermoplastic. For anyone who’s worried that a plastic might not provide adequate protection in comparison to a steel cup, I suggest watching this video, which illustrates how a polycarbonate motorcycle windshield can be hit by a brick, a baseball bat and even a bullet without breaking or cracking. The same material is also used for riot shields. The change in material also means that it has a little more flexibility. I’ve already mentioned the silicone lining on the Aero Fit, which provides superior comfort in comparison to other groin guards. It also means that the cup doesn’t sit quite as close to the body, which provides a little more room for manoeuvre. The steel cups can be a little limiting and this is a much better alternative. Another issue with the Thai cups is the strings they have to fix them in place. When those strings get wet, they become very irritating and can cut into the skin. Given the placement of those strings, that can be extremely uncomfortable, so the leg and waist straps that Lo-Bloo use are much easier, more comfortable and more hygienic. The Lo-Bloo straps are much easier to use and more secure than the strings on the outdated Thai cups. With a Lo-Bloo, there’s no need for anyone else to be fiddling around with a string in your ass, trying to get it undone after a fight. that’s great for everyone, if you ask me. The plastic body also means that there’s no cold metal on your crotch, which must be a nice change from the Thai cups.

Lo-Bloo groin guards are machine washable. Each one comes with a drawstring wash bag, so you can just put it in there and throw it in the machine. So easy! The fact that it can be washed after use makes it more hygienic than most groin guards out there, but to take it a step further, the cup is one piece of plastic and contains no seams, padding or absorbent materials that can soak up sweat and harbour bacteria. 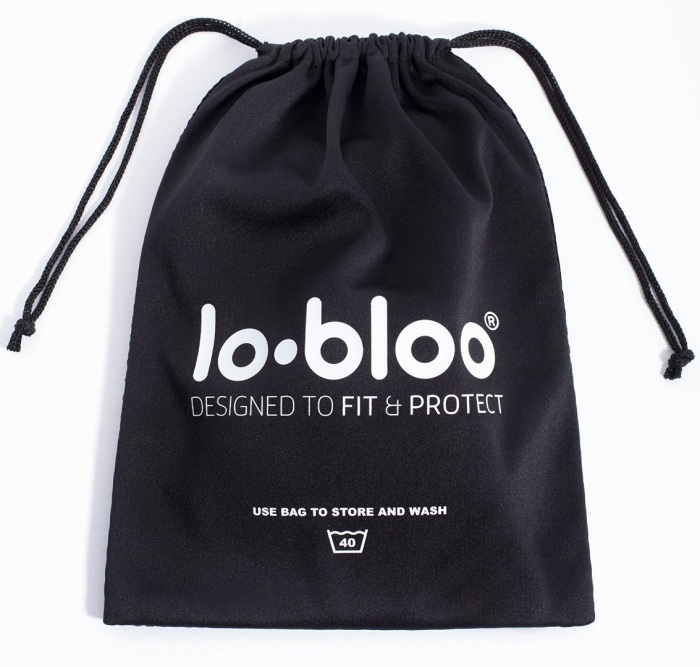 Personal Experience – Use in Sparring and Fighting

The first fight I used the Aero Slim for was for my fight against Kradaithong Por. Promin. She has a very hard right kick and in one of the early rounds, landed one straight to my crotch after I’d lifted my leg up to throw my own kick. Usually, this would have been really painful, but remarkably, I felt nothing at all. After the fight, Kradaithong’s gym manager, Miriam, contacted me to ask if I could recommend a groin guard for her, since she’d had the same problems with finding a suitable one in Thailand. I was more than happy to hook her up with LoBloo, who sent her an Aero Slim. She used it for her fight on 16th April and loved it, according to Miriam. Here’s what Kradaithong said about it: 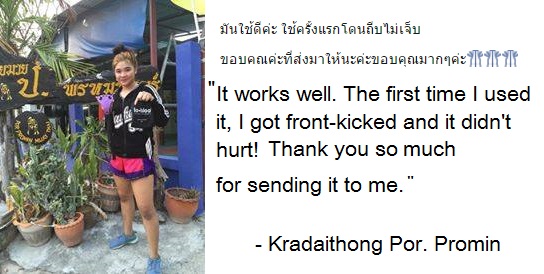 Tu has been wearing his Aero Fit for his regular fights on Max Muay Thai and hasn’t used his old groin guard since it arrived. When one of the officials at the Max stadium saw him putting it on, they said he couldn’t wear it because it wasn’t made of steel, and that was somehow against their regulations. He didn’t want to go back to his old cup, so wore it anyway and makes sure to put it on out of sight these days. He’s very happy with it, and says it’s much more comfortable than any other cup he’s ever used.

All in all, both of us absolutely love our Lo-Bloos and continue to use them regularly in our training and fighting. After our experience with them so far, neither of us would use any other brand. In terms of comfort, Highly recommended, for sure!

Shipping and How to Buy

Lo-Bloo provides free shipping around the world. You’d expect free shipping to be incredibly slow, but it’s actually the complete opposite. Mine arrived in Thailand after only 6 days! You can order directly from their website or through Amazon UK or US. You can use the promo code SAVEI2K to get 10% off orders through Amazon.