Being 5ft 2″ and 50kg, I am almost always the smallest person at the gym and up until quite recently, was the only woman at the gym for the majority of the time. This means that I’m usually sparring with someone bigger than me.

This is really great for me for a number of reasons and has helped me to improve tremendously. My trainer often says that he used to ‘baby’ me by choosing my sparring partners carefully, but that in the last year, he’s changed to more of a ‘rough and tough’ approach, which he says has worked wonders for me. I would definitely agree with that. It’s forced me to develop confidence, have no fear and stand strong under pressure. As a result, I now never feel scared or intimidated in sparring, no matter who I’m up against. Quite recently, I sparred with Ian, a gigantic ex-professional rugby player who weighs 115kg. He totally dwarfed me, but I wasn’t worried at all. In fact, it was a great session and we had a lot of fun. Of course, I am certainly not usually up against quite such gargantuan sparring partners, and it helped that he went super light. On this occasion, we were put together as a kind of experiment, to see how I would go against him and to see how controlled he could be. It worked brilliantly.

Some pictures of me sparring with some of the bigger guys (click to enlarge). 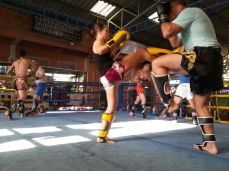 The size disparity between me and my sparring partners isn’t usually quite that big, although it is often significant.

Training with a variety of people with different weights, sizes and skill levels is always beneficial and keeps my training dynamic. I’m not always training with giants, that would be silly. However, working with bigger and heavier training partners is helpful for preparing me for fights because I usually have to fight larger opponents.

My last fight was one of the rare occasions where I was up against someone my size, and in comparison to the people I’m up against on a daily basis, this felt very different. I enjoy this kind of training and I’m aware of how much it helps me to improve. That being said, if I’m constantly sparring with bigger people, it can sometimes become frustrating.

This became apparent to me in one particular training session recently. I was having trouble reaching my opponent, their shins seemed to destroy mine and even in controlled sparring, the difference in weight behind everything that they threw was wearing me down. Clinching was another matter, where I seemed to be getting thrown to the canvas far too often, my head yanked down far more than I would have liked, and being generally overpowered. On any other day, I would have loved the challenge. It doesn’t usually bother me, but on this particular occasion, it did. I thought to myself ‘ugh, I would just like to spar or clinch with someone my own size for a change! I always have to be the little guy’. I’m not sure why I became so whiney in that moment. Perhaps it was a result of mental and physical exhaustion and built-up frustration. I’m certainly not unaccustomed to those moments, one of which I wrote about in Crying – Training: It Happens.

Coincidentally, the following day, I was asked to spar with Nong Sky. Nong Sky is the smaller half of the father and son duo who arrived at our gym a few months ago. His father, Kru Cheep, is now one of our trainers. Sky is 13 years old, but looks like he’s 9. This kid is tiny. Working with him felt totally different to what I’m used to. Everything flowed nicely and it made a really nice change to be working with someone smaller. Still, he was like a little rocket and was able to keep me on my toes with lots of head kicks. During that session, he was given some ‘tough love’ and a lot of things to work on by the trainers. The afternoon session involved more of the same, and we sparred again for around an hour and a half. During the final round, everyone else had stopped sparring and all eyes were on us. The trainers were laying into Nong Sky, constantly shouting instructions at him while cheering every time I threw something at him, with his father joking that he was better off cheering for me than for his son. With that, Nong Sky started to throw everything a lot harder and I could see that he was getting frustrated under the pressure that the trainers were piling onto him. I instantly recognised it, having been in that position countless times myself. Just before the end of the round, I saw his face change and his eyes start to well up, so backed off slightly and coasted for the last few seconds of the round. As it came to a close, he began to cry. The trainers then raised his hands while we all clapped for him, after which he ran off, presumably to take a moment to recuperate. I’ve been there.

For a moment, I worried if I’d gone too hard. My instant reaction was a pang of guilt. I like to think that I spar very lightly in general and thought that I’d taken care to remain as light and controlled as possible with him. But this may not have been the case. Our perceptions of how hard we are hitting are not always true to reality, especially in comparison to our perception of how our opponents are hitting. Sylvie von Duuglas-Ittu wrote a very interesting post about this topic. After reflecting on my experiences of being in Nong Sky’s position so many times before, I knew that it was most likely to be the general pressure, exhaustion and frustration that got to him, rather than how hard I may have been hitting him.

I’ve cried numerous times in training, but never because I was annoyed or upset at anyone but myself. It was very interesting for me to be on the other side of it for the first time. Witnessing someone else go through that very same thing gave me a better understanding of the whole process and why I experience the emotions that I do during those moments. More than anything, it was nice to see that it’s not just me who has those moments. After writing about the subject, the amount of feedback I received from other fighters was enlightening, but seeing it happen in front of me was another thing entirely. In that post, I talked about how annoying my sparring partner was going, but in hindsight, my interpretation may have been clouded by my own frustrations with myself, or other external factors. I can admit that I experience bouts of ‘small person syndrome’ from time to time. I’ll probably think twice before I complain about any of my sparring partners in the future!

Some pictures of me and Nong Sky (click to enlarge). 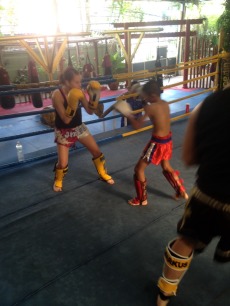 5 thoughts on “Being the Little Guy”