I visited Sor. Ruenrom last week to try out a training session. It’s a small, grassroots gym on the outskirts of Bangkok. There’s very little information about the gym online, aside from a Facebook page that isn’t regularly updated, so I wanted to post about my experience there.

When I first looked the gym up, I found that they were in the process of relocating. This originally caused some confusion for me. I spoke via the gym’s Facebook page to a guy named Phil, who seemed to be the manager, and he told me that although they were in the process of moving, I could still go and train at their original gym that day. However, when I arrived, I found the place to be completely empty. 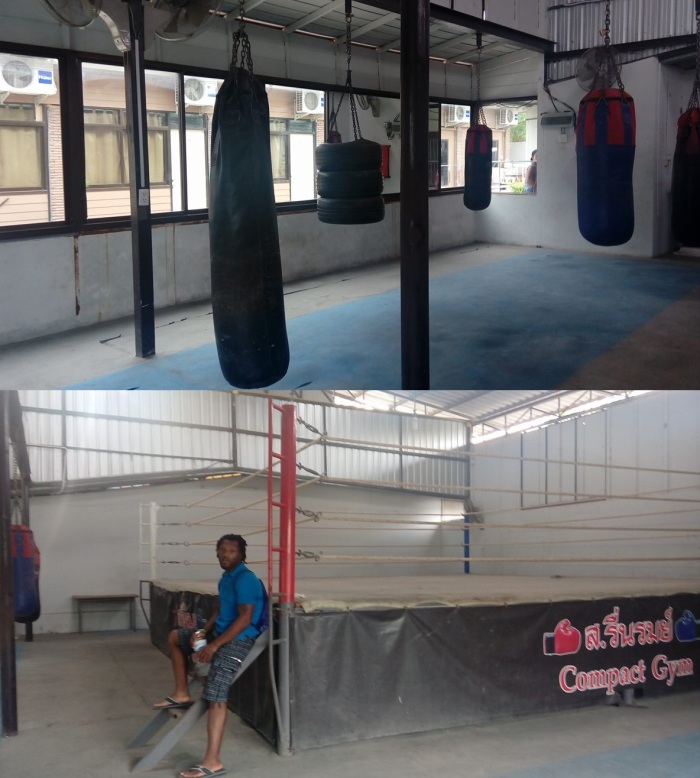 Tu at an empty Sor Ruenrom

There was obviously some kind of miscommunication, which Phil later apologised for, and after a couple of weeks, I decided to give it another try. I contacted him again and he kindly gave me the new location and arranged for someone to meet me on the main road and walk me to the gym. When I arrived, I was introduced to the head trainer, Bovy Sor Udomsorn. Bovy had a huge fighting career, winning WMC, Rajadamnoern, Thailand and S1 titles and fighting in lots of shows outside of Thailand. He was a regular in Japan’s Shootboxing shows for a few years. You can see a highlight of some of his best fights here. I’m not sure how long he’s been teaching at Sor Ruenrom, but the below video by My Muay Thai from 2011 shows him talking about how he’d one day like to be a trainer.

As well as Bovy, there were three or four young Thai boys, one of whom appeared to be cutting weight. I was the only foreigner and only female there. Bovy then handed me a skipping rope, told me to use it for 20 minutes, then went to join the other boys, who were sitting on the ring.  I’m not sure if I just got the wrong impression, but he seemed somewhat irritated. Perhaps he hadn’t been told that I was coming and was annoyed about that, or perhaps I was misjudging, but my first impression was that I didn’t feel particularly welcome. The boys avoided me completely, which wasn’t a surprise as Thai boys can be very shy and will usually avoid making eye contact with a foreign girl. It’s also very common for some Thai people to be shy around foreigners in general because they can be embarrassed about not being able to speak English. It’s something I deal with very often, not only when I’m teaching but also in every day life. Once, a lady I wanted to buy some food from at a market saw me coming and almost ran out the back so she wouldn’t have to speak to me, telling her husband to serve me because he could speak English. When I addressed her in Thai, she gave a sigh of relief and and was happy to chat to me. With the guys at this gym, it wasn’t quite the same experience. They just seemed generally uninterested. I certainly didn’t expect the fighters to be bothered about some random farang girl walking into the gym, but I do expect a trainer to be a bit more enthusiastic. He only said a few words to me during the entire session. Maybe he’s just the quiet type?

After I’d finished skipping, Bovy told me to do 200 knees on the bag. He watched me do a couple and then walked away, and when he returned to find that I’d finished, told me to do 50 kicks on each side. While I did those, he held the bag for me, but looked off in another direction and paid no attention to what I was doing, offering no feedback whatsoever. When I was done with those, he handed be some small dumbbells and had me do 100 push kicks with those in my hands and then two shadowbox for two minutes with them. Again, he walked off somewhere else while I did all of that. The other boys didn’t go through the same routine, most of them were still sitting down while I was doing the bagwork, and didn’t get started until a little bit later.

Padwork was next, and Bovy called me into the ring. I asked him whether I ought to go under the bottom rope or through the middle, since I wasn’t sure what the protocol was in that gym, and he lifted the bottom rope for me to crawl underneath. After one round with him, another guy named Ban stepped in to hold pads for the rest of my rounds. I quite enjoyed working with both of them, but seemed to flow much better with Ban. The timing of the rounds seemed to vary, but were a minimum of four minutes and a maximum of seven, which I liked. I did five rounds in total, the last of which was boxing only. After that, it was 50 kicks on each side to finish. The padwork was decent, but Ban had a habit of pushing the pads into my punches, which is my pet hate. It means that I can’t extend my punches properly and puts me at risk of damaging my wrists, as well as taking all the skin off my knuckles, so that bothered me a little bit.

After padwork was sparring. I first did a round with a young Thai boy, before Ban stepped in to do four or five more with me, without breaks. Two other boys were clinching while we did that. Ban was very playful, where as the first boy was very cocky in a ‘watch me beat up this big farang girl‘ type of way. That doesn’t bother me because I’ve had that experience with lots and lots of young Thai boys before and I can’t blame them for it, but I was happy to switch partners. Just after we finished sparring, there was a torrential downpour and the entire gym flooded because they’d yet to lay down proper flooring, which abruptly ended training. I can’t be sure if we would have continued past that, but by that time, we’d already been training for two hours and I was spent.

My experience at Sor Ruenrom was a mixed one. I had a good session in terms of how hard I was worked, but technical instruction was almost zero and that was certainly a downside for me. Once, while shadowboxing, Bovy told me to hold my right hand differently. Later, during padwork, he told me to twist my body more when throwing my up-elbow. That was it. Neither of those times did he watch me do it again or let me know if I’d done it right afterwards. I understand that since I hadn’t paid for a private session, I couldn’t expect a lot of individual attention, and that they probably wanted to see what I’m about before deciding whether or not to bother investing in me, but it didn’t give me a great impression or make me want to come back again. During the bagwork routine I did at the beginning, it really seemed as though I was just being given things to do to in order to keep busy, which didn’t feel good. There was another guy, who I think was the owner. He was much warmer and was the only Thai person there who had a conversation with me. After watching me train for a little bit, he offered me a fight on the 20th, which I declined. You can see a little bit of my padwork and sparring from that day in the video below.

Sor Ruenrom is your typical Thai gym, with basic facilites, a handful of young fighters and a no-nonsense approach to training, focusing more on conditioning than technique. At least, that’s how I was trained in that one session. On paper, it seemed like exactly what I needed, but long-term, I don’t think that is the case. With Bovy’s impressive resume, I’m sure he has a lot to offer as a trainer, but I didn’t feel that this gym was a good fit for me. My priority is to tidy up a lot of bad habits I’ve acquired and fix some holes in my game, and this didn’t seem like the place for me to do that. This gym would be better suited to someone who’s goals are a little different to mine. If you just want to spar, hit pads and have your cardio pushed, then you might like this place. Their morning sessions are different to what I’ve described here, and usually consist of a 10k run at Suan Luang park followed by strength and conditioning, although I’m told that Bovy is available for private lessons at any time.

Cost: 500b per group session. 700b per private session with Bovy

Location: Sor Ruenrom is off Chalerm Prakiat Ratchakan Thi 9 Road, close to Suan Luang Rama 9 park and Sitsongpeenong Gym. Since the gym has recently moved, the current location on Google Maps is yet to be updated and is now incorrect. The gym is now right next to a temple named Wat Kaewpithak Charoen Tham วัดแก้วพิทักษ์เจริญธรรม, just a short walk away from the old location. The picture below shows where the new gym is in relation to the old one. There is no BTS (skytrain) in that area, so the best way to get there would be by taxi from either On Nut or Udom Suk station.