I recently went through a long period of having no female training partners and no one suitable to spar with aside from my trainers, which was really difficult and disheartening. I’m used to training by myself and it’s something that I actually often enjoy, but doing it for such a long time ended up becoming quite a drag and I felt like I wasn’t making progress with my training. It was hard to stay motivated during that time, which isn’t something I’m used to struggling with. So, when Milena, who trains in Poland and runs a blog called Muay Thai Rebel, got in touch with me through the Muay Thai Roundtable forum to say that she was coming to Bangkok and wanted to train with me, it was great news.

Milena has always been an active member of the forum and I’d enjoyed reading her posts there, so it was unsurprising that we got along really well when she was here. We sparred together, which we both enjoyed even though we are completely different sizes (she is much taller than I am) and afterwards, we met up with Kelly Creegan of It’s Pandamonium for dinner and had a great time. Kelly is hilarious, which you’ll know if you read her blog because it comes off in her writing just as much as it does in person. Unfortunately, I didn’t get any photos at dinner, but here’s one of me and Milena at the gym. 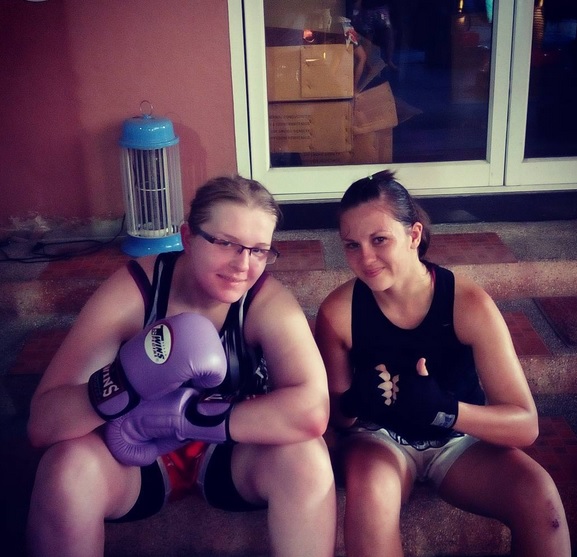 After training with me, Milena headed to Phuket to train at Rawai gym. Not long after she left, I had some more visitors. Sean Fagan of Muay Thai Guy recently brought a group of people to Bangkok for a 1-month training camp at Khongsittha gym. One of the people who joined the camp was Kate Sholy, who had two fights in the space of two weeks while she was here (see a highlight video of her fights and training here). The second fight, against Beck Beirne from Australia, was at MBK Fight Night, which fortunately means that the video can be seen below.

Kate could have had a third fight while she was here. Beck was apparently keen for a rematch and the promoter was eager to see them fight again as well. I can see why after watching that video! However, instead of fighting again, Kate decided to spend some of her last week in Thailand training with Sylvie in Pattaya and then me in Bangkok. I’m always happy to have another female come to the gym, and having also met Kate online via the forum made it even more exciting. I’ve met Sean online as well, as he interviewed me for an episode of his podcast quite some time ago, so I was already familiar with them both despite having never met either of them in person. They turned up to my gym on to a Friday afternoon session and we were able to not only meet but train together, which was great. They actually got there before I did because I was a little late, which was slightly embarrassing for me, so I jumped into the ring and said hello while they were shadowboxing and followed suit alongside them. Since training had already started, there was no time for conversation and we jumped right into training. Kate and I did some sparring, which was really fun. She remarked that she’d never seen the boxing block that I use before (it was one of the first things Master Toddy ever taught me, I will have to put up a video of it some time) and I found it hard to land kicks on her because she was so quick to slip them. It was lovely to have a new sparring partner who challenged me in a different way, but also a great way to meet her. It’s fun to get to know someone by chatting and punching each other in the face at the same time. After sparring was over, we all did padwork. Below are a couple of videos of them doing pads that I took. 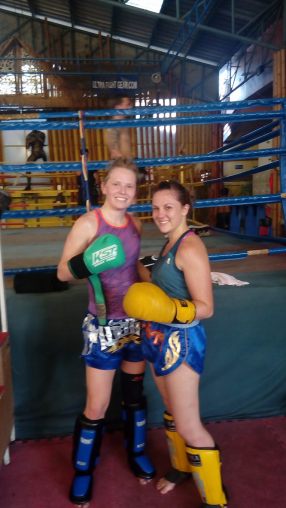 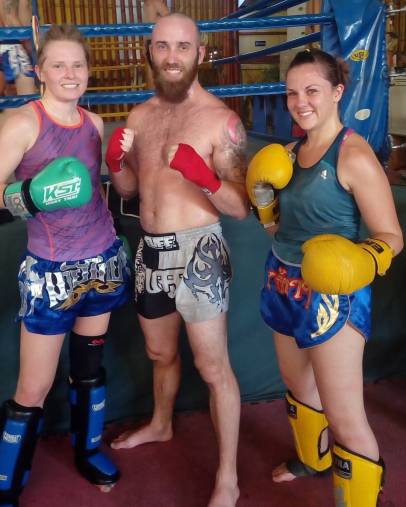 Sean and Kate were both such awesome, friendly people and I could have easily chatted with them for much longer if we didn’t all have places to be after training was over. I know that Sean will be back in Thailand for future training camps and Kate has promised me that she’ll be back again as well, so I hope this won’t be the only chance I get to catch them. On the day they came to visit, my new Zalora gym shoes had arrived, so I wore them to the gym and for my run that day (and subsequently fell in love with them). Sean was kind enough to take this photo of me wearing them before he and Kate shot off for their end of training camp party. His group was heading home that weekend. 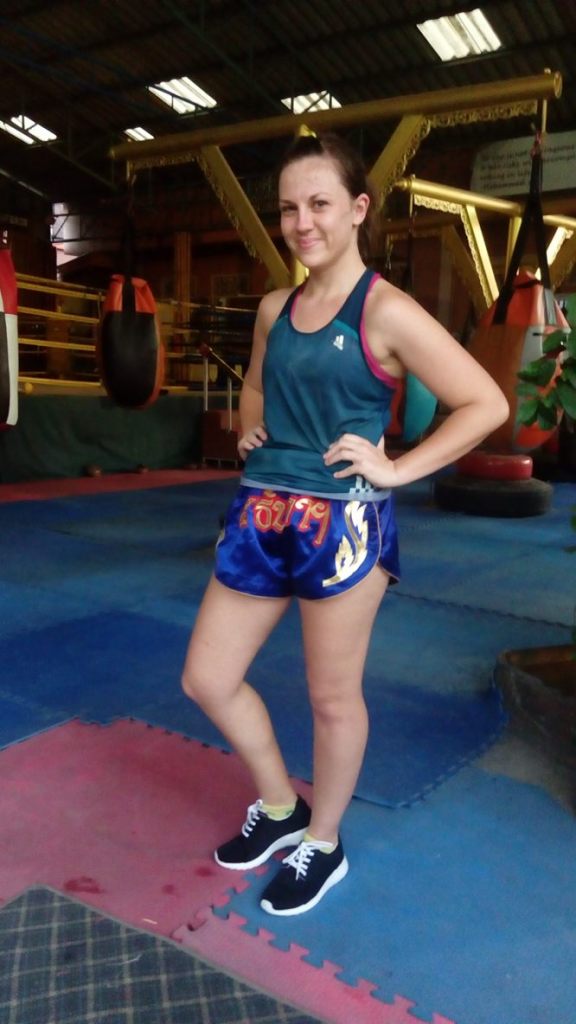 Overlapping with Sean and Kate’s visit was one from Marina, a Japanese friend of mine who trained with me almost three years ago and finally made it back again. Rather than just being there for a day, she stayed for a month and we sparred every day that we were both there, which was exactly what I needed. She’s the same size as me and an excellent partner, so we learned a lot from each other during that time. I’m hoping to return the favour and visit her gym in Japan sometime. Sylvie recently put out an open invitation for women to come and train with her and has already had a huge response with lots of ladies visiting her gym since then. It’s kept her very busy, but I’m sure it’s been a really enjoyable change for her. It’s always good to have new people to train with, but being able to make connections like these with people online and then have them transcend into the gym is really wonderful. I look forward to making more of them in the future. A new group of people from New York has turned up at my gym, which includes a few women who I’m told follow my blog, so it looks like I have some more people around already. 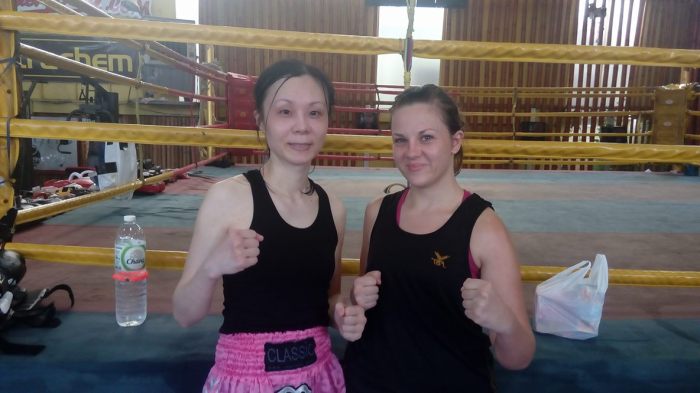 Marina and Me after our first day of training together since 2013.