I’m always incredibly happy to get more women into the gym. For a long time, I was the only woman training here long-term, until Katy turned up last year. You can read more about Katy and what her presence in the gym has meant for both of us in The Joys of Having a Female Training Partner: Part 1.

Thankfully, there have been quite a few more girls as of late. One of them is Sarah Chung. Sarah got in touch with me just two weeks after I set up Under the Ropes in August last year. She was in a very similar boat to one that I had previously found myself in, as a female who was living in Thailand and working as an English teacher, with a passion for Muay Thai and in search of the right place to train. Her first message to me read as follows:

“I actually read your guest article on Sylvie von Duuglas-Ittu’s 8 limbs.us blog a while back. It was really, really encouraging for me to read that post and now your blog, too. You’d said some things where I felt you were expressing my own thoughts/feelings and it is incredibly refreshing for me. I don’t really have much of a Muay Thai community where I am. I am the only foreigner and female at my gym where they speak no English and my Thai is still limited, so it can get pretty lonely at certain times, especially if I’m struggling with something. So being able to read a blog like yours online, with someone expressing thoughts that echo my own and experiencing similar things helps me in a massive way. It’s great to read about what you’re doing, and encourages and inspires me all the more, especially as you are working as a teacher too.”

It was excellent to connect with Sarah. I felt that we had a lot in common and was eager to help her. We continued to exchange messages on a regular basis after that, and I found that she was facing some issues not only in juggling training and teaching, but within the gym she was training at. As we discussed those in further detail, I was hoping that she would be able to come to train with me at my gym, as I knew that our similar outlooks would make us great training partners. Now, nine months later, she’s moved into the gym and is my next-door neighbour. She’s also secured a teaching job with the same company that I work for. It has all worked out very nicely, and I’m really happy to have nudged Sarah in the right direction and to have gained a new training partner.

As well as Sarah, there has also been Maggie, a German woman who came to the gym with her boyfriend, Bruno. She and Sarah actually turned up to the gym on the same day to start training. I hadn’t heard from Maggie before, so was pleasantly surprised to see her when I came downstairs for the morning session. As I introduced myself, Sarah said ‘she reads your blog, too‘, to which Maggie added ‘yes, that’s why I’m here, actually‘.

Maggie has moved on and is now training at Lanna Muay Thai, where Sylvie of 8limbs.us trained before her recent move to Pattaya, but Sarah is here for the long haul. Before either these ladies turned up, there was another Maggie (this one was from Amsterdam, I shall refer to her as ‘Dutch Maggie’). Dutch Maggie got in touch with me to do an interview with me as part of a thesis she was writing on Muay Thai heritage for her Master’s Degree. Originally, she planned to just drop by the gym once for the interview and train somewhere else. As it happened, what was supposed to be a flying visit ended up being a two-week stint of training with me, and we got along so well that we almost forgot to do the interview entirely, as we were always distracted by talking about other things. I will actually be visiting her in Amsterdam in a few weeks, as I have planned to make a detour during my holiday in the UK. I’m very much looking forward to that.

It is really lovely to hear from women like these and to connect with them via this site. My sole intention of setting up Under the Ropes was to put something out there for other women in the sport, and to have received the response that I have has been wonderful. It’s also enabled me to form friendships with like-minded people that I would never have met otherwise. As an added bonus, last week, Jacqui Bogart was training with us. Jacqui is a fighter from the UK who trains under Lisa Howarth, Master Toddy’s first female fighter and one of the pioneers of women’s Muay Thai, at her gym, Northern Spirit in Manchester. She has both British and European titles to her name, and is currently ranked 6th in the UK for female bantamweight fighters. Although Jacqui was only with us for a week, it was lovely to have her around. 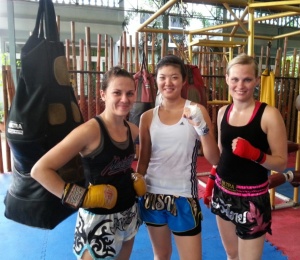 Me, Sarah and Maggie

With ‘Dutch Maggie’, just before we sent her off to the airport.

Having more women at the gym has made a nice change to my training. Of course, I enjoy training with men just as much, and get good quality of training regardless of the gender of the person I’m working with, but having other women to connect with certainly provides added benefits.

Many women can relate to the loneliness and alienation that sometimes comes with being the only female at the gym. With these ladies around, those feelings are non-existent. Their presence also provides an added, mini network of support within the gym, as we can always vocalise our thoughts or feelings about training and help each other through whatever difficulties we may be having. That’s not to say that we can’t do that with men, but we may be more reluctant to do so. Sylvie von Duuglas-Ittu wrote about what it’s like to be a female in a Muay Thai gym in her recent post, ‘Do women Have a Commitment Advantage in Muay Thai?‘ She touched on the idea that women often struggle to prove themselves or earn their places in the typically male space that is the gym. Being a lone female in that situation can be a difficult thing to deal with at times. With other women around you, that isn’t the case.

I asked Katy what her thoughts were on the subject, and she responded with this:

“Some guys get uncomfortable sparring with girls, and I can’t control or judge the way they feel but it often means they end up being too nice. It’s awesome to train with girls because we aren’t afraid to trade with each other. The best and most intense sparring I have is with women. It also feels like a privilege to be able to meet all these women, exchange stories, and be inspired by them. It pushes me to train harder and gives me a true feeling of teamwork and family.”

I understand what Katy means about men sometimes ‘being too nice’ in sparring. I love sparring with all different kinds of people, but I have come across guys who’ve said that they ‘just don’t feel comfortable hitting women’. Then, there are guys who are quite happy to smack me around the ring, and I appreciate that. When I spar with women, sometimes we’ll chat and laugh all the way through sparring while simultaneously beating the shit out of each other, and other times we’ll have silent, intense sessions where we’ll just focus and go at it. So, it’s swings and roundabouts, regardless of who you train with!

The point she makes about teamwork and family applies to everyone in the gym, but it’s also great to have other women around you who just get it. There’s a mutual understanding between us that comes up in various moments in training. It might be in something as small as glancing at each other from across the gym or rolling our eyes at something that someone has said, but even just the presence of another female in that environment is a comforting thing to have. We inspire, push and support each other on a daily basis, and I’m very grateful for that.

3 thoughts on “The Joys of Having a Female Training Partner: Part 2”