Every year, a group of women put on a production of The Vagina Monologues in Bangkok. This group calls themselves Bangkok Rising, and their mission is to fight gender-based violence.

They do this by volunteering their time to raise funds and awareness. All of the proceeds from their events are donated to Baan Phak Phing, a refuge for young women and girls escaping abuse in Chiang Rai. This year, in their 8th production of the show, they raised over 99,000 THB for the foundation.

I’ve attended the show as an audience member in previous years, and while I’ve always wanted to get involved in what Bangkok Rising do, I never had any desire to get up on-stage. This year, I had the opportunity to do both of those things.

As part of the production, they select a ‘vagina warrior’ — a strong female role model who’s fighting for change in her community — to appear on-stage and make a speech at the end of the show. To my surprise, director Hanah Meltzer reached out to me in February to ask if I would accept the title. I wasn’t sure that I deserved it, and the idea of talking in front of an audience terrified me, but I was more than happy to oblige. 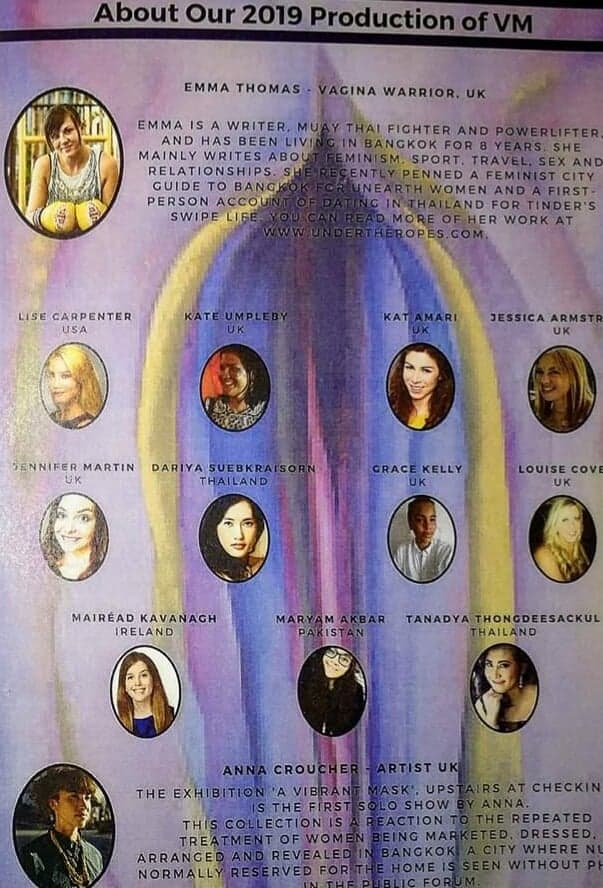 I attended a rehearsal to get a feel for the show and meet some of the cast members. Then, spent the remaining days poring over what I would say. At first, I had doubts, and I wondered why I deserved a platform or why anyone would be interested in what I had to say. Then, I remembered that I’d had these same thoughts when I first started writing. That gave me the inspiration I needed. I decided I would talk about the impact of finding my voice as a fighter, as a writer, and as a woman.

The show took place over two nights, on the 7th and 8th of March. It gave me confidence to know that no matter how the first night went, I would have another shot at it on the second. It was just as well, because initially, I was too nervous to fully enjoy what was happening. However, seeing women tell such compelling stories and audience members respond so positively made it hard to stay self-centered for long. As the night went on, the room filled with the power, confidence and voices of the women around me, and I grew into it.

Shortly after this piece, I was up. I was kindly introduced as a ‘Muay Thai fighter, powerlifter, and writer who dedicates herself to helping other women’. With that, I took a deep breath and stepped up to the mic. Here’s (most of ) what I said:

“‘Vagina Warrior’ is undoubtedly the best title I’ve ever been given, so thanks to Bangkok Rising for that. I kind of want to print it on a t-shirt, add it to my resume, or maybe stick it on business cards and start handing them out. Basically, I’m going to be milking this for a little while.

I’ve never been called a warrior before, but for most of my time here in Thailand, I’ve been a fighter. Muay Thai is what first brought me to Thailand, and while it’s been incredibly empowering for me as a woman, it’s also been quite restrictive at times. It’s not a sport that’s entirely friendly to women. The best way I can explain that is to tell you that while male fighters enter the ring by going over the ropes, women have to crouch down and crawl under the bottom one. People say that it stems from a superstition that our female bodies are somehow polluting or bringing bad luck to this sacred space. In fact, there are some rings that we’re not allowed to enter at all. If you go to the most prestigious stadiums in Thailand, you won’t see female fighters. Instead, you’ll see signs that forbid women from touching, let alone entering the ring. Of course, these are the stadiums with the most exposure, opportunity and money. Thankfully, there has been some progress. Recently, they’ve started to allow trans fighters to compete in those spaces.

Being a woman in this sport and being a woman in Bangkok have both been isolating for me at times, and I’ve always combatted that isolation by writing. At first, I started a blog to get my own stories out there. I wrote about how much I loved Muay Thai, but also about how I was sometimes being paid half as much as my male teammates for fighting on the same shows, and often being treated differently in my own gym. I also wrote about how I escaped an attempted rape by one of my trainers, and how when I spoke up about it, some of the other men at the gym responded with a strange mixture of bullying me, blaming me, and trying to fuck me — because rape culture.

Speaking of which, I expanded my writing to highlight rape culture as a whole in Thailand, and to share other women’s stories, too. This has at times caused much bigger conversations than I’d planned. Somehow, writing about feminism has gone from a hobby to a career, and people actually pay me to do this now. Most surprisingly, it’s even led to talks with the British Embassy, who reached out to me for advice on how to improve the way they handle rape cases in Thailand.

This has shown me the real power of creativity and community and connection, and how such amazing things can happen when you put yourself out there and get together with other women. I think Bangkok Rising and is a really great example of that, so thank you for inviting me to share a little bit of the spotlight.”

I needn’t have been so nervous. The audience was incredibly supportive, listening intently and giving me much more applause than I thought I deserved. When I was done, some of them came up to me to thank me for telling my story and tell me how much they loved what I was doing. Some even asked if I would collaborate with them on upcoming projects. It was incredibly encouraging, and I came away with my heart feeling full, and my schedule feeling just as full as I racked up appointments with some of the amazing women I met.

The best thing about this experience was that it gave me the opportunity to connect with so many other like-minded women. I’ve often felt lonely and desperate for female friends here in Bangkok, and the fact that I spend most of my time either at the gym or at home doesn’t help that, so this was exactly what I needed. It showed me that there are so many other women like me here in this city, and pushed me out of my comfort zone so that I could meet some more of them. For that, I’m very grateful.

Many of those women are members of the Wonder Women of Bangkok Meetup group, which hosts regular get-togethers for women in the city. Now that I know this group exists, I’ll certainly be attending some of their upcoming meet-ups and encouraging other women to do the same. To join, click the link below.

This group is for strong, independent women who are living in Bangkok. We are looking to build a community of fierce women to socialize, have adventures and support each other…

Check out this Meetup Group →

The show was accompanied by an art exhibition called A Vibrant Mask. The artist, Anna Croucher, described it as “a collection of exposing, brash and impulsive mixed media works capturing women in Bangkok and beyond”. Take a look at her Instagram to see some of her work.

If you’re interested in joining Bangkok Rising, being part of a future event, or following the work they’re doing, visit the Bangkok Rising Facebook page.

Photos by How Ling Yai and RJ Rojvirasingh 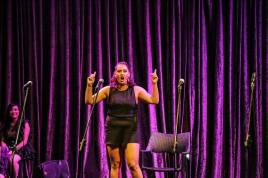 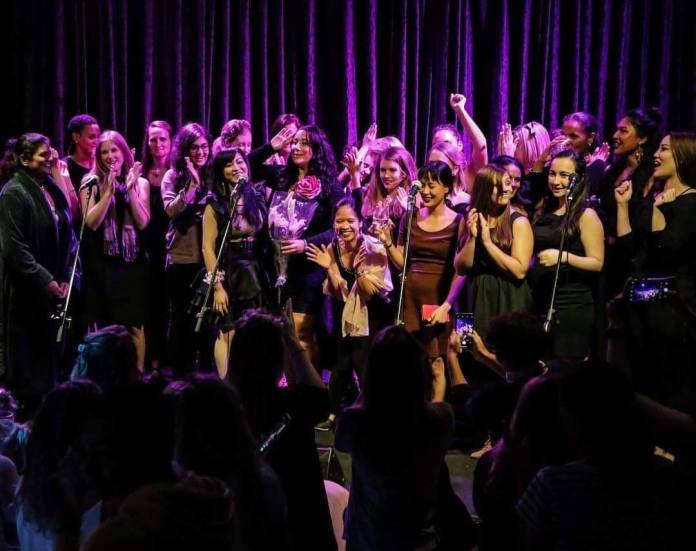 One thought on “The Vagina Monologues in Bangkok”