The #MeToo movement hasn’t quite caught on in Thailand. While there have been a few small ripples, they have mostly passed without sparking a wider conversation.

When you delve into the complex issues of victim blaming and rape culture in Thailand, it’s easy to see why.

Last year, Supensri Puengkhokesoong, director of the Social Equality Promotion Foundation, said Thai women’s reluctance to say #MeToo was also partly due to the fact that no local celebrities had championed the movement.

That was before Cindy Sirinya Bishop came along.

Cindy is a famous Thai-American supermodel and actress and the host of Asia’s Next Top Model. She inadvertently sparked a movement earlier this year when she publicly spoke out about victim blaming in Thai society.

In the run-up to Songkran, government officials warned women that they should dress conservatively in order to avoid sexual assault. This is nothing new. In 2016, Prime Minister Prayut Chan-O-Cha said the same, comparing women in sexy clothes to unwrapped candy. Every year, the government repeats this tired rhetoric, and every year, women are sexually assaulted in huge numbers. In a recent survey, almost 60% of women said that they had been sexually assaulted during Songkran.

In response, Cindy posted a video hitting back, branded with the hashtags #Don’tTellMeHowtoDress and #TellMentoRespect. The video went viral, garnering a much bigger response than #MeToo ever did in Thailand. She told Bloomberg that this was likely due to the fact that she wasn’t accusing anyone individually.

“Our society is quite conservative, and for someone to come out and point a finger at someone who’s assaulted her is huge, I don’t know if we’re ready for it yet”, she said.

Cindy knew that it couldn’t end there. Now, she’s carrying the torch for victims of sexual assault in Thailand, launching several campaigns to challenge the culture of victim blaming in Thai society.

Last week, Cindy opened her #Don’tTellMeHowtoDress social power exhibition in collaboration with UN Women Asia. She was inspired by Kansas University’s ‘What Were You Wearing?’ exhibition, which displayed clothes survivors wore when they were assaulted. #Don’tTellMeHowtoDress does the same. In this video, she talks about why she set it up and what she hopes to achieve.

It’s placed in the middle of Siam Paragon, Bangkok’s most famous and expensive shopping mall. In the midst of outlets like Versace, Jimmy Choo, Louis Vitton and Marc Jacobs, this exhibition stands as an uncomfortable reminder: what you wear has nothing to do with sexual assault. 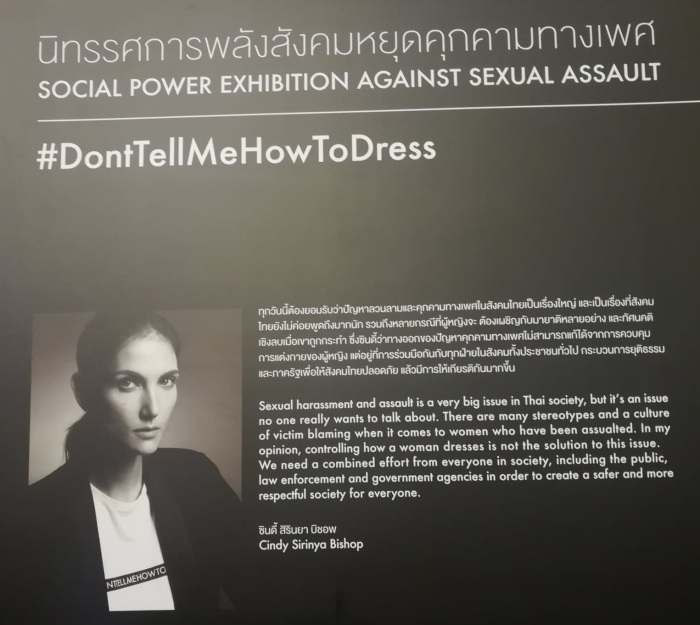 Here are some of the outfits that are on display, as well as the painful stories that accompany them. 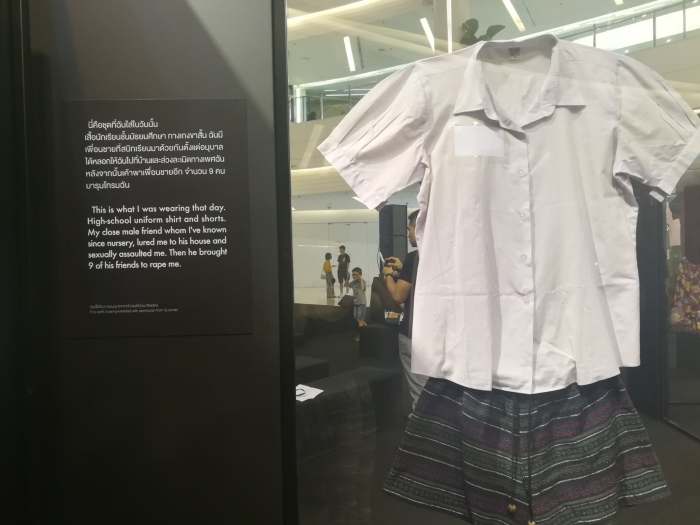 “This is what I was wearing that day. High school uniform shirt and shorts. My close male friend, whom I’ve known since nursery, lured me to his house and sexually assaulted me. Then he brought 9 of his friends to rape me.” 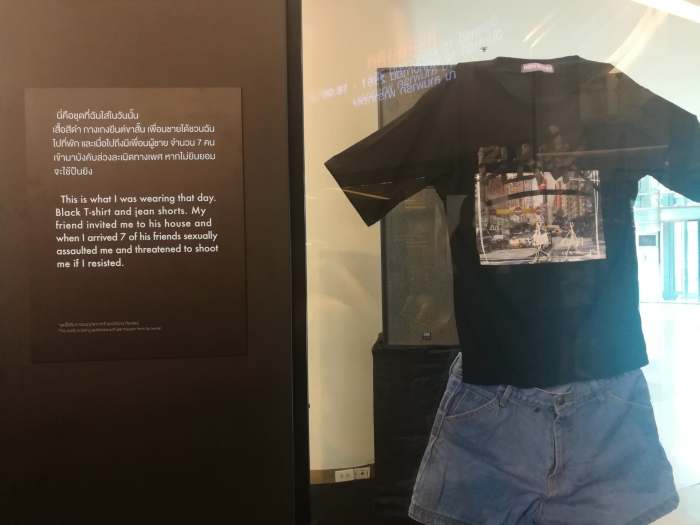 “This is what I was wearing that day. Black T-shirt and jean shorts. My friend invited me to his house and when I arrived, 7 of his friends sexually assaulted me and threatened to shoot me if I resisted”. 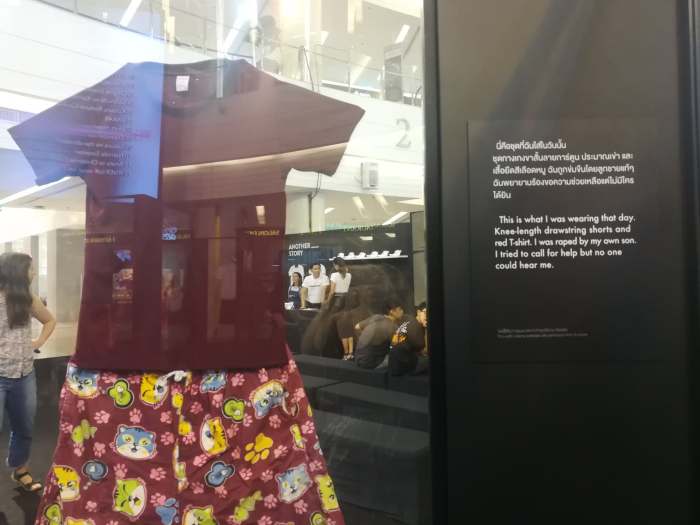 “This is what I was wearing that day. Knee-length drawstring shorts and red T-shirt. I was raped by my own son. I tried to call for help, but no one could hear me”. 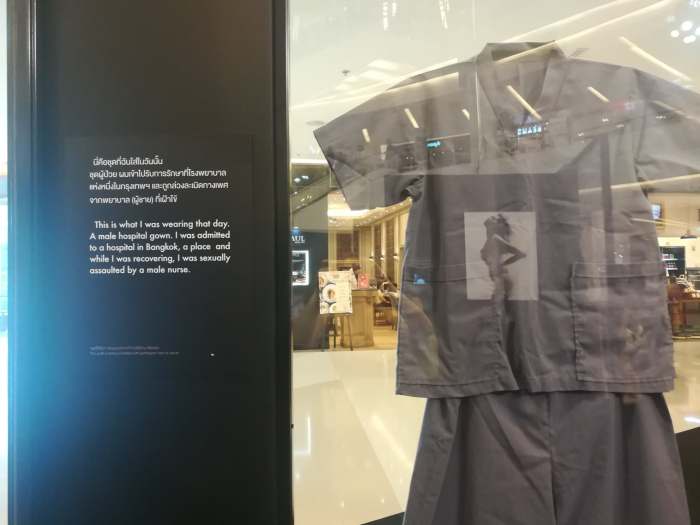 “This is what I was wearing that day. A male hospital gown. I was admitted to a hospital in Bangkok, and while I was recovering, I was sexually assaulted by a male nurse”. 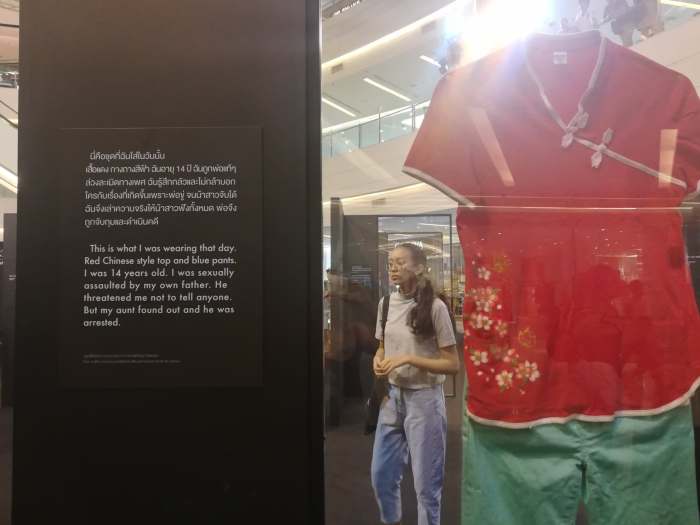 “This is what I was wearing that day. Red Chinese style top and blue pants. I was 14 years old. I was sexually assaulted by my own father. He threatened me not to tell anyone, but my aunt found out and he was arrested.” 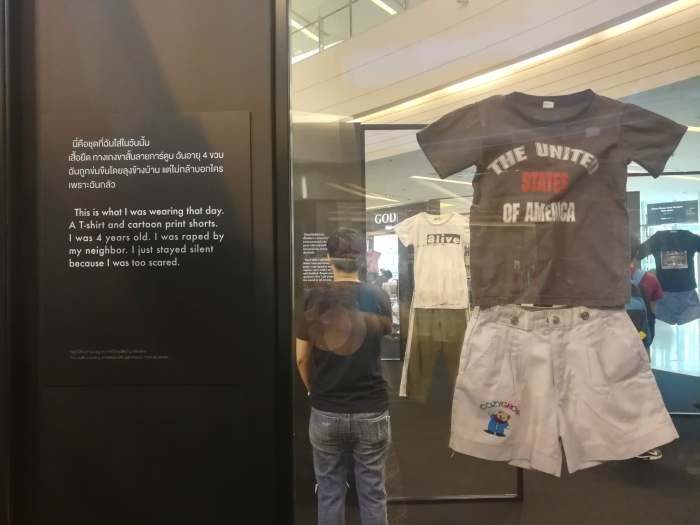 “This is what I was wearing that day. A T-shirt and cartoon print shorts. I was raped by my neighbor. I just stayed silent because I was too scared.” 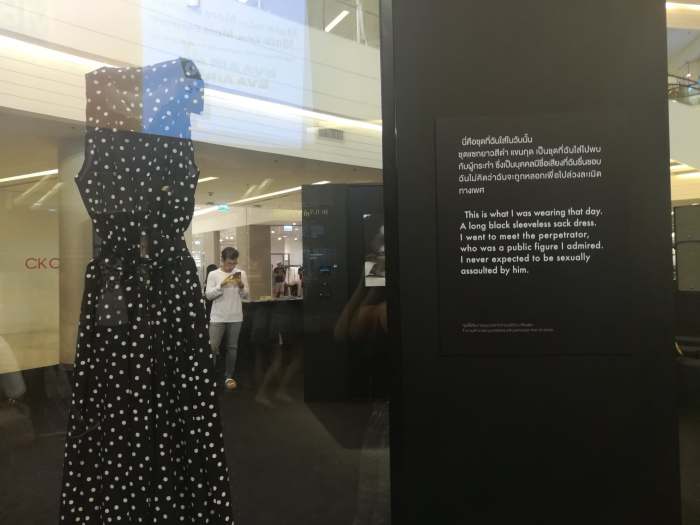 “This is what I was wearing that day. A long, black, sleeveless sack dress. I went to meet the perpetrator, who was a public figure I admired. I never expected to be sexually assaulted by him.” 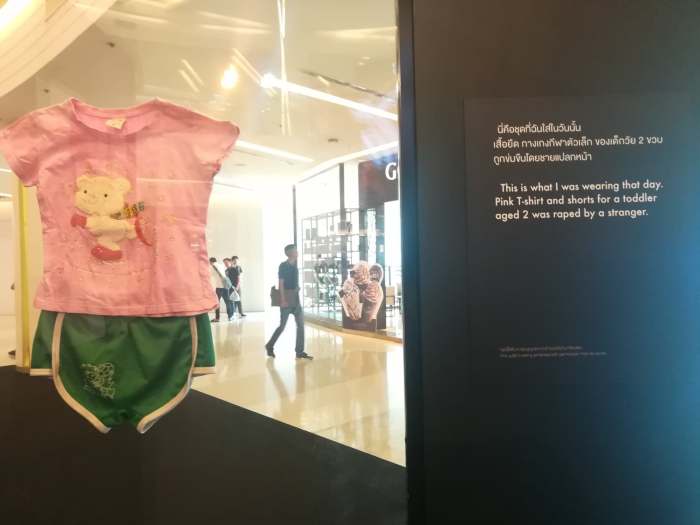 “This is what I was wearing that day. Pink T-shirt and shorts for a toddler. Aged 2, I was raped by a stranger”. 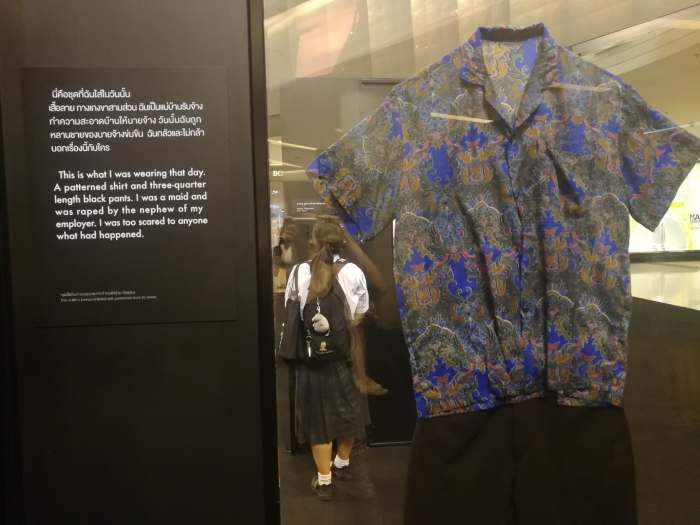 “This is what I was wearing that day. A patterned shirt and three-quarter-length black pants. I was a maid and I was raped by the nephew of my employer. I was too scared to tell anyone what happened.”

The exhibition also included a powerful description of what happens when people like these come forward to report rape and sexual assault. This came in the form of a small alcove, labelled ‘Myths and Misconceptions About Sexual Violence’. When visitors walk in, they are immediately bombarded by messages of victim blaming. Plastered on the walls are quotes from survivors, prosecutors, police and government officials. One of them, reportedly told to a 12-year-old victim by a police officer, read “you were raped because of the way you dressed; if not by this offender, you would have been abused by another”. Another, from a female police officer, read “rape is something that only happens to low-class people, the uneducated, or migrants”. 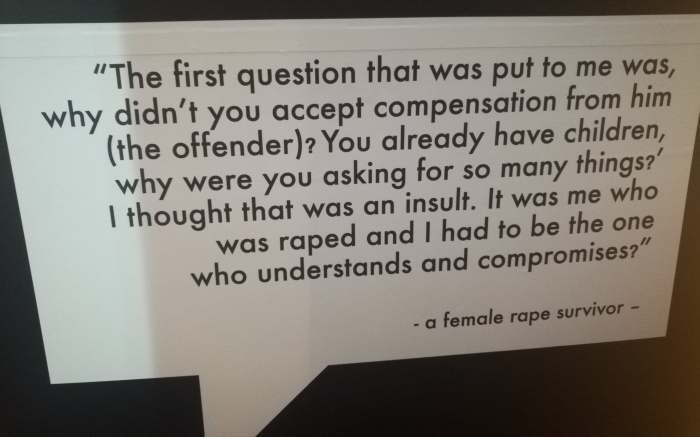 As you read, similar messages blare out from speakers mounted on the walls. “She was asking for it”. “We were just having fun”. “Were you drinking?” “Maybe it’s not all men”. “What were you wearing?” “Did you fight back hard enough?” These are the same messages women hear from the media, co-workers, friends, family and even partners in the outside world. 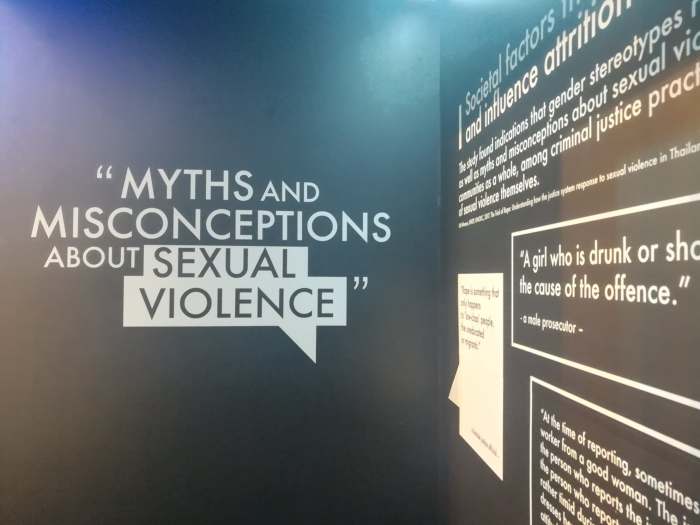 Other Thai celebrities have also joined Cindy in the campaign. Around the exhibition, there are pictures and videos of celebrity advocates, along with screens showing videos of them talking about what it means to them.

Perhaps the most telling part of the exhibition was a board displaying a single question: “Do you think the way a woman dresses is the cause of sexual harassment?” Visitors could vote ‘yes’ or ‘no’ using stickers. Here’s how it looked when I visited. 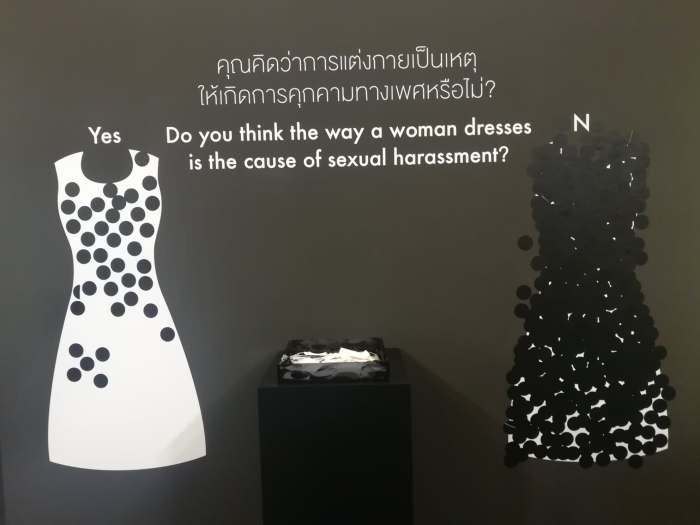 Since then, lots more stickers have been left on both sides. Some have even left some in the middle, showing that many people are still on the fence. In this post, Cindy Sirinya is lifting her son up to place a sticker on the ‘no’ side. She uses this as a symbol of how she’s teaching him to have respect for everyone, regardless of gender, and encourages others to do the same.

#Repost @cindysirinya with @get_repost ・・・ Do you think the way a woman dresses is a justification for sexual assault? I don’t. And I will make sure my son doesn’t either. It’s on us to educate the next generation to respect each other regardless of gender, race, age or religion. Equality starts in the home. #donttellmehowtodress #respectforall @donttellmehowtodress

#Don’tTellMeHowtoDress is on the 1st floor of Siam Paragon from June 25th – July 1st 2018. From July 3rd – July 15th, it will be on the 4th floor of Bangkok Art & Culture Center. Admission is free.

Going Viral in Thailand: The Response to My Post on Rape Culture