This fight was the start of a new chapter for me. It was my first fight in a year, my first fight since leaving the only other gym I’d ever fought for, and my first fight with a new team, representing Attachai Muay Thai Gym.

I was offered sponsorship at the gym at the beginning of May, on the condition that I would fight for them on the 20th, on what was to be their grand opening event. Having just a few weeks to train after such a long break made me a little anxious, but I was mostly just excited to be fighting again. During the year in which I wasn’t fighting, I lost a lot sight of myself. I felt a million miles away from the fighter I used to be, and at times, I didn’t feel like a fighter at all. Finding this gym made me realise that it was just a matter of being in the right environment, and within the few weeks I had to train, my confidence began to build back up.

In the end, the grand opening event fell through, but they booked me to fight at Ramkhamhaeng 2 night market (also called Number One Plaza) on the same night. It’s a tiny little market near a university with a ring set up in what looks like a car park, opposite a supermarket with a rollerblading rink and a futsal field. There were lots of familiar faces there, some of which I hadn’t seen in a few years. The guy who was standing at the entrance selling tickets recognised me straight away and immediately commented that I was ‘fat’ now. This was unsurprising, as I was fairly used to people pointing that out to me by then. He thought he was pretty funny. Later, he made another joke. ‘Will you marry me?‘ I rolled my eyes. Good one.

I grabbed a program and found my name, listed opposite Nong Fang Sor. Praithong, who I’d fought in 2014. In that fight, I won by KO in the first round. It would be interesting to see how different one would be. Since then, she had clearly lost a few kilos and I had gained some, so it was much more even than our first meeting, when she outweighed me.

After some time waiting around, Kru Att wrapped my hands. He used training wraps, which was a first for me. I assumed it was just to save time, but who knows. After that, I got myself warmed up.

Warming up a little last night

Just before it was time to fight, Kru Att came over to put the mongkol on me. I mentioned that it should go on after I’m in the ring, and he said ‘no, now‘. On it went.

I wasn’t sure if I should say anything or not. Male fighters always have the mongkol put on beforehand, whereas women don’t because it can’t pass under the ropes. With this being my first fight for him, I wasn’t sure if he’d just forgotten about that or didn’t want to follow the rules. I figured that the first one was much more likely, and I’d rather have an awkward moment now than in the ring in front of everyone, so after we’d stood there for a moment, I asked him whether he wanted me to go over or under the ropes. He had a sudden moment of realisation. ‘Oh! I forgot‘, he laughed. In this photo, you can see the moment just before he realised what I was talking about, as he’s looking over at the ring. 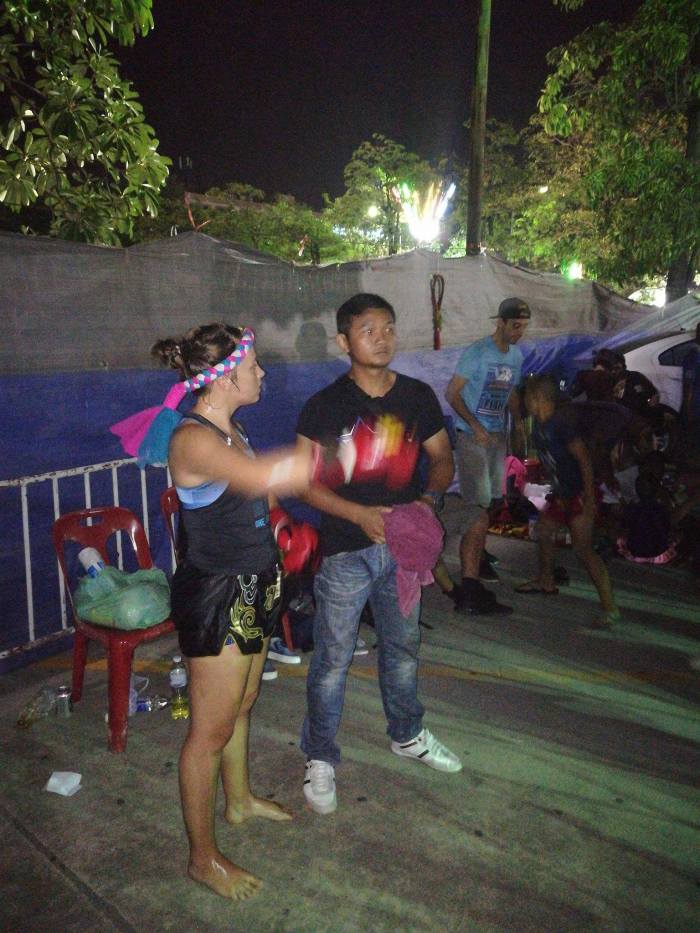 He took the mongkol back, and off we went. It felt good to hear the announcer call me ‘Emma Attachai Muay Thai’. It also felt good to do a ram muay for the first time in a long time. Mine was over first, so as Nong Fang was still performing hers, Kru Att went over how he wanted me to fight. ‘No need to rush‘, he said.

Nong Fang had improved a lot since I fought her the first time, which I actually found quite exciting. When we first met, she was nervous and rushed in with punches. This time, she was cool and confident and smirked at me whenever she managed to dodge one of my kicks. Not that it was hard to do so. My distance was completely off and I lost count of how many times I kicked thin air. That was the main thing that was difficult for me to adjust to after my lay off. The rest came naturally. Unsurprisingly, it was a completely different fight. 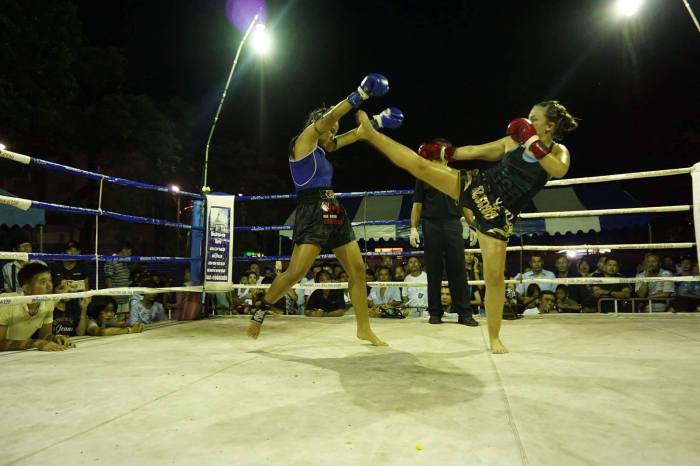 Almost all of the other fights that night were kids fights, which meant that in the corner they had these tiny little stools that look like something out of a kindergarten classroom. I had to pretty much squat all the way down to sit on them, which was a little awkward.

In the car on the way there, Attachai had held up a bottle of some herbal liquid and said he would give it to me in between the last couple of rounds when I got tired, and you can see him doing so in a photo below, cupping his hand around my nose. He has a very calming presence in the corner, and I was grateful for that.

Having not fought for a year, there were bound to be things that were rusty, the biggest one being my distance, which was way off. My corner urged me to punch first to measure up before kicking, so I did that with more success in the last three rounds. Halfway through the fight, she managed to land three or four good straight knees in the clinch, which weren’t painful but squeezed the air out of me. I’m pretty sure air wasn’t the only thing that came out though, because they also pushed down on my bladder. Turns out that as well as being my first fight with my new gym, it was my first fight in which I peed myself. Well, as they say, there is a first time for everything.

I landed some good punches on her and it became evident that she was scared of my hands. Unfortunately, I wasn’t able to capitalise on that. Right at the end of the fight, I started to come into my own, landing more and celebrating after I did so, and that felt good. It wasn’t enough though, and Nong Fang won on points.

I really enjoyed this fight, and the result was of little importance to me. After a long period of uncertainty, this fight proved that I could still do it, and got me excited to keep doing it. I also felt really good about the group of people I had around me, and was confident that I had the right team.

As I was still feeling out the protocol of my new gym, I wasn’t sure what to do in terms of money. I’ve never been a sponsored fighter before either, which made it newer territory for me. I’d been handed a 500 baht tip from the promoter as I came out of the ring, so I used that to buy beers for all the trainers and everyone who had come. After that, I went home feeling really happy with how the evening had gone.

See below for more pictures from the fight (click to enlarge)