When I first started working in Bangkok, I didn’t have a gym to train at, so did a lot of running around the city to keep fit. As time went on, I developed a real urge to get into competitive/organised running and looked up lots of events to join, but when I managed to start training Muay Thai seriously, I realised that I was just looking for a challenge because I wasn’t able to train or start fighting at that time. It turned out that fighting was what I needed, although I still thought that when I eventually stopped fighting, I might like to get into it as a kind of replacement. Four years later, I’m still here and still training and fighting. Recently, I’ve hit a point where I’ve become bored and somehow lost focus. There has been an ongoing period of uncertainty for the last few months, and during that period, I realised I needed to change things up to keep myself stimulated. Coincidentally, there was an upcoming half marathon at Mega Banga, which is the shopping mall I work at, so I decided to go for it. It seemed like a good thing to throw into the mix.

Since I’m always running as part of my regular training anyway, training for the race wasn’t a problem.  All I had to do was increase my mileage gradually. I set a goal to get up to 16km comfortably before race day, which I did without any trouble. Running for that long after morning training in 35° C heat did mean that I got a ridiculous sports bra tan along the way, though. I did a lot of foam rolling and got a lot of massages to make sure I kept my legs in tact during that time. The run would obviously be a challenge, but didn’t anticipate it being too much of a struggle. I knew that I could do it, so it was just a matter of getting it done. I was more worried about how early I would have to get up for it! Thailand’s races always start super early to beat the heat, and this one was set for 5 am, which meant that I had to wake up at 3:30 am to get there. I would have to make sure I was well-rested, so although I worked 11 am-7 pm the day before the race, I made and ate some pasta as soon as I got home, then went straight to sleep. Unfortunately, I was woken up just one hour later by a huge thunderstorm and didn’t get back to sleep until 1:30, but dragged myself out of bed two hours later and made it to the starting line. When I got there, there was a really great atmosphere that made me feel energised, so I soon forgot how tired I was. I still had around half an hour until the race started, so spend that time walking around, stretching and people watching. While I was doing so, there was a team of 8-10 people from Kenya already taking their place right at the front.I positioned myself towards the back so that I wouldn’t get caught up in the crowd, as with so many people crammed into one space without staggering the starting time, the was bound to be a bit of a pile up at the beginning. 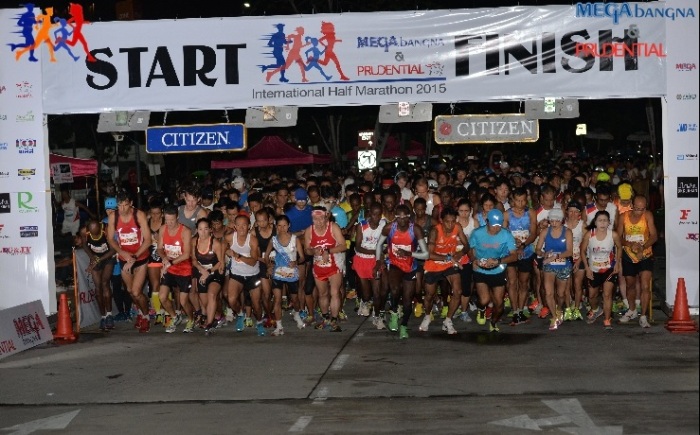 Although getting up to start so early in the morning wasn’t particularly enjoyable, running in the dark before the sun came up really was. It was nice to just run in cool air without breathing in car fumes and having to weave in and out of traffic. The course ran in a straight line along a highway that went back on itself with a U-turn leading back to the start. When it seemed like I’d only been on that road for 5 minutes, I saw the Kenyan team shooting past me in the other direction, having already passed the U-turn that was miles ahead of me. It seemed impossible that they could already be that far ahead, but these were professional runners and I was just on my first attempt, plodding along slowly in comparison. We all cheered and clapped as they passed us, then went back to our own hard slog. Strangely, I didn’t see any distance markers until I hit 9km. However, Thailand’s running events don’t have a particularly good reputation in terms of organisation, so I wasn’t surprised. Last weekend’s Bangkok Marathon came under fire for accidentally adding 7km to their half marathon, as well as not providing enough toilets or distance markers. I’m glad I didn’t choose that race for my first time!

After exhausting most of my iPod playlist during the first 10 km, I started listening to a podcast from StuffMomNeverToldyou.com (thanks to Sylvie for the recommendation) from there until the 17 km mark. I started to notice that I was going slower as I passed the drink stations from here on. Previously, I’d just grabbed a cup and kept running at the same speed, but at this point, I had to start slowing down and sometimes walking for a few steps before I threw my cup away and kept running. The other thing I noticed was that I kept smiling uncontrollably like a mad person at random points in the course. I’m not sure why, I just couldn’t help it! It just felt really good to be there, I guess. 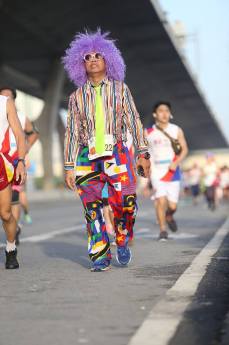 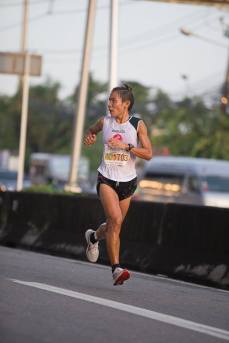 Coming around the corner at the entrance to the car park, just before the finish line.

The last kilometre consisted of an uphill slop followed by a steep downhill gradient. That was definitely not good for my joints or overall energy levels, but from there, it was just a short burst to the finish line. At least, it felt like a burst, but in reality, I probably didn’t pick up any speed at all because my legs just would not allow me to. That last part involved weaving through a car park as well, which wasn’t entirely convenient as a car pulled out in front of me just before I reached the end, but it felt great to finally cross the finish line when I did. I was met by a man who handed me a medal, followed by another who handed me a some kind of food. I grabbed it, not really registering what it was but knowing that if it was something I could put in my mouth, I would take it. However, when I stopped to take a look at it, I realised that it was a McDonald’s pork burger and swiftly handed it back. Nope!

My bemusement at being given a burger at the end of a race was quickly followed by the sense of both relief and achievement as it set in that I’d finished. I’d done it! I’d set a goal and achieved it, and that was a pretty awesome feeling. My finishing time was 2hrs 32mins, which is apparently almost dead-on average for a female my age. I was pleased with that, since my initial goal had been just to finish the race without injuring myself! I didn’t want to pick up anything that would set me back in my fight training. Now that I’ve checked that box, I’m sure that I’ll run another one and try to beat my time. I have my eye on another half marathon event in January.

Immediately after the race, I got a taxi home, showered and ate before heading straight back to the venue to start an 8-hour shift at work. It was a strange but wonderful feeling to have achieved a goal before even really starting my day. As that day went on, it became more and more difficult to sit down as my legs stiffened and by the end of it, I was walking like an old person. I made sure to get a massage to remedy that because from there, I was jumping straight into training for my next fight, which is a big show for the King’s birthday at Sanam Luang. Now that the race is done, I’m excited to be working on getting ready for that.

One thought on “Running My First Half Marathon in Thailand”