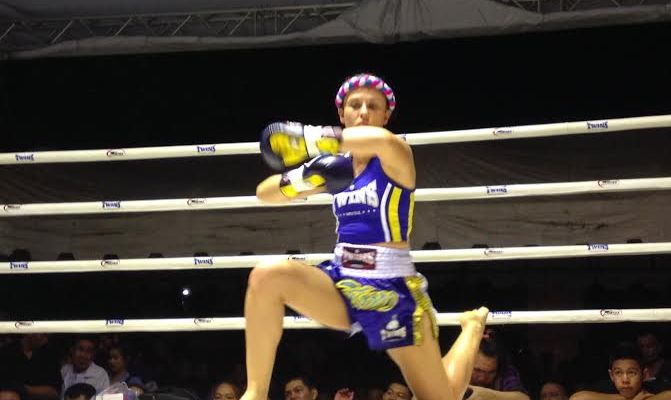 The Queen’s birthday is the biggest day of the year for female Muay Thai and Sanam Luang or ‘Royal Field’ hosts the most prestigious event on that day, The Queen’s Cup, which is held by One Songchai. Last year, a second Queen’s birthday show started there, an all-female promotion under the name ‘Muay Ying Association’.

I watched some of last year’s show before heading across the field to the Queen’s Cup event to watch Sylvie von Duuglas-Ittu fight and was very impressed by it. Not only was it an all-female show, but a snazzy one with some real effort put into it. I could tell this because the production was so sleek. Every girl had a nice uniform and as she came out, her picture was shown on a giant screen behind her while entrance music blared and smoke machines blew. In between fights, a double act of announcers entertained the crowd (or bored them, depending on how you look at it), much like Thai Fight.

I was already familiar with the promoter of this show and had become further acquainted with him after fighting on another show of his at Asiatique a few times, so was hoping he’d invite me to fight on his 2015 event. I’d never really had any specific goals for my fighting career, but really wanted to fight on this show after seeing it the first time. As luck would have it, he did ask me, as well as Sylvie and Phet Jee Jaa, so we’d all be fighting on the same show. Even better!

The lead up to this one was hard. As I wrote in my previous post, I was struggling with a number of different issues. Most of my friends and training partners had left, my gym was going through some kind of slump where the trainers didn’t seem very interested and I was doubting myself as a fighter and my desire to keep going. On top of that, I was really struggling to drop weight. This was the first time I’d had to weigh in for two years (as weigh-ins only seem to be used in Thailand for championships or televised events), and a month before the fight, I’d just come back from a vacation back home, where I’d inevitably put on a few kilos. I wasn’t worried about losing them because when I get into my usual training and eating routine, I usually drop weight very easily. However, this time was very different.

For some reason, my body was just not cooperating the way it was supposed to, which became very frustrating. I wasn’t sure if this change was a result of me getting older or just my body plateauing and needing something different to trigger the weight loss, so I switched up my diet and tried lots of different things along the way.

I cut out all salt and sugar, made leafy greens and vegetables my main food source and played around with portion sizes and the times at which I ate. In the end, I still had to do a water cut, which meant a lot of sweatsuit and sauna work. The difficult process didn’t help my general mood and probably contributed to a lot of the negative thoughts I was having, but I got through it and made weight in the end.

Sylvie and I went to the weigh-in together. Here’s her vlog of us just leaving very swiftly to go back to my gym afterwards. We were so eager to get out that we left before we could be told that we were supposed to get changed and pose for pictures, oops.

My opponent was Phetwaree Mor. Krungthep Thonburi, a previous S1 Flyweight Champion. She won the belt on the 2013 King’s Cup event (pictured below) but then lost it to Miri Sasaki from Japan the following year. Miri still holds the title now after defending it at last year’s Queen’s Cup. You can see the Phetwaree vs. Miri Sasaki fight here.

The program lists me as the 10th fight and my opponent as ‘Saowaree’ (same girl, different prefix). We’re at 52kgs, although the fight was actually at 51. Seeing this posted on Facebook by the promoter the night before the fight was when I learned that we’d be fighting three rounds instead of five. Only two-minute rounds, too. This wouldn’t give us much time, but there were lots of girls fighting, so only the main event fights could be five rounds long, including Phet Jee Jaa vs. Phet Tae Or. Wanchert, which had a 40,000 Baht side bet on it.

There were lots of really good fighters on this show, below are photos of each match up, taken after the weigh-ins (not including me or Sylvie because we bolted before they were taken). I’ve added the names to each one.

I went to Sanam Luang with Sylvie and Kevin at 5 o’clock, telling my trainers that they didn’t need to come along until later because I wouldn’t be fighting until around 10pm. When we arrived, the promoter gave us our uniforms, a Twins set with shorts that had ‘12 August‘ written on them in Thai (pictured below) and we settled down in a spot backstage to rest and get ready.

Since the fights were so short, it wasn’t long before Sylvie was up, although I was getting my hands wrapped while she was fighting, so wasn’t able to see it. In retrospect, I could have just waited to get my wraps done because there was such a huge gap between her fight and mine. It might have been around two hours! It was just unlucky that my trainer wanted to do them at exactly that time.

Sylvie fought against an opponent she’d faced and beaten twice before, Gaewdtaa Por. Muangpet, but lost on points this time. In her video update just after the fight, she talks about how it went. 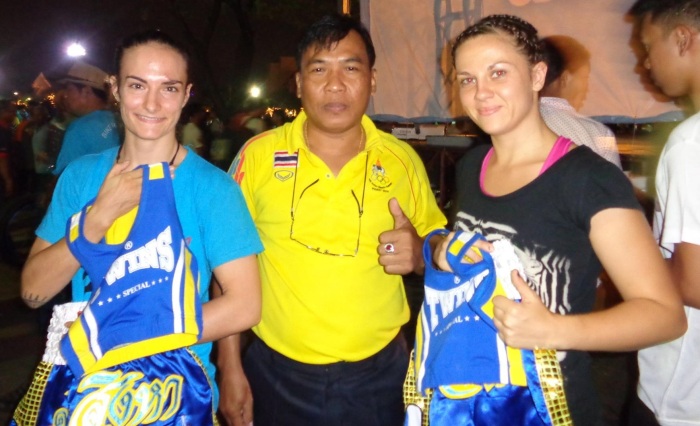 As the evening went on, there wasn’t much for me to do except rest, prepare, and wander back and forth between our spot and the portable bathrooms that had been set up. As my fight drew closer, I decided to run back for one last pee just to be safe and my trainer came with me.

When we got there, we were told by the staff that they’d been closed, so my trainer proceeded to rant at them, despite their repeated claims that I couldn’t use them, asking them if they would prefer for me to pee on the floor. It was slightly embarrassing, but I very much appreciated the fact that he cared enough to do it, and they gave in to him in the end. No one wants to have to worry about peeing their pants in a fight.

The fight itself was rather slow. During the first round, we both spent most of our time in kicking range, throwing single shots and testing each other’s reactions. I felt very calm and controlled and came away from it thinking ‘this won’t be easy, but I have no reason to lose to this girl‘.

The second round, while we both came out with our feet moving a little bit faster, wasn’t too different. I blocked almost every kick she threw, but spent too much time waiting and defending instead of initiating. At that point, I was behind but thought that either one of us could take it if I stepped it up.

In the third round, her movement was totally different. She knew exactly what she needed to do and bounced around, moved backwards and made me chase her while she threw kicks. I knew that I needed to use punches in order to win, but they just weren’t coming out and on the few occasions that I did use them, they felt sloppy and inaccurate, which isn’t a feeling I’m used to when punches are concerned. It seemed like the fight was over in a flash and at the end of it, Phetwaree won by decision very clearly.

I knew that I hadn’t fought to my full potential, but didn’t give myself a hard time because it had been three months since my last one. I could see very clearly where I went wrong and while I wasn’t able to correct it when I needed to this time, I’ll be able to do so in the future with some more hard work.

I needed to stop trying to defend and kick so much and get back to my old style of getting in with punches to then open up space for kicks, so will keep that in mind. She wasn’t throwing with much power, so I could have pressed forward instead of focusing so much on defending, but I should have done that in the first two rounds, before she had a chance to win fighting backwards.

I also generally don’t do well with three-round fights because I’m a slow starter, but these kinds of fights seem to be becoming the norm for me, so it’s something I need to adjust to. It was frustrating to have lost to someone that I knew I didn’t need to, but little benefit comes from dwelling on it. As soon as the show was over, I found the promoter and asked him to get me another fight as soon as possible so that I could get back in because when I fight often, I usually fight at my best. While it had been a disappointing night results-wise, I was really happy to have fought on that show and to have done it alongside Sylvie for the first time. Hopefully, we’ll be able to do it again on another show.

See below for a gallery of pictures from the night (click to enlarge). 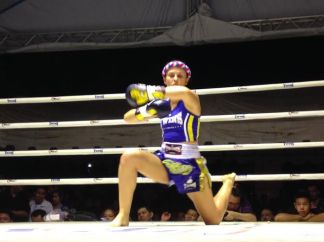 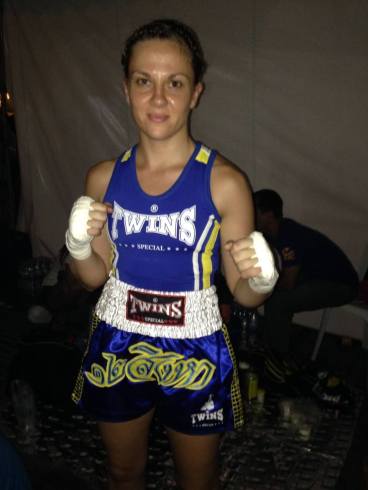 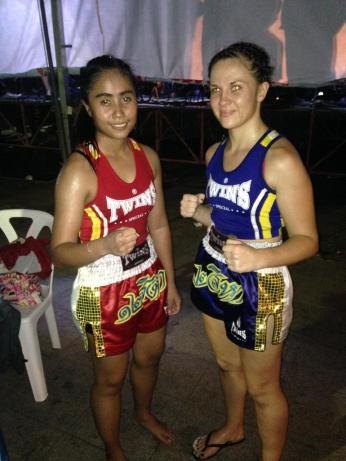 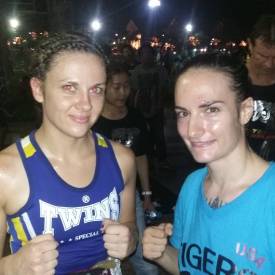 2 thoughts on “vs. Phetwaree Mor. Krungthep Thonburi on The Queen’s Birthday at Sanam Luang, 12th August 2015.”