On October 4th, myself and a few others from my gym were lucky enough to be able to attend Prison Fight. Prison Fight is a charity event that puts foreign fighters up against Thai prisoners in Muay Thai and boxing bouts, which tours around various prisons in Thailand.

The latest Prison Fight show was the fourth, and was held in Khlong Prem Bangkok Central Prison. Khlong Prem is a high security penitentiary, which holds both male and female male inmates.

I’d previously tried to gain access to the show via various people, but was told that there was no way I could possibly get in, as prison security measures were of course very strict. However, after speaking with my trainer, he assured me that he’d find a way. He saw that the legendary Dieselnoi Chor Thanasukarn was working with the show, and reached out to him to make it happen. Dieselnoi has made a few visits to our gym recently, one of which happened to be the day before the event. Sure enough, he promised to meet us at Khlong Prem the following morning and take us in with him as his guests.

We arrived at the prison grounds to be greeted by Dieselnoi, and felt very lucky that he’d given us such a special opportunity. He led us through the looming metal gates, where we were then greeted by several prison guards. After signing in and going through security checks and searches, we were told to leave our belongings in lockers, as no mobile phones or money would be allowed into the prison grounds.

While Klong Prem’s appearance seemed cold and unwelcoming, I was surprised by the warmth and hospitality that the prison officials showed us once we were inside, allowing us the sit ringside with them and providing us with food and drinks throughout the event. Clearly, we’d arrived in the right company. As I scanned the area, I could see that it was a very limited event, available exclusively by invitation only. The only way to see Prison Fight, it seemed, was to be an inmate, a fighter, or to be working on the show. That, or to be with Dieselnoi!

As well as Dieselnoi, there were various other great figures of Muay Thai present, including Pudpat Noi Worawut. Dieselnoi refereed some of the bouts himself, a job he’s also been doing for the Muay Thai Warriors shows quite recently. It’s great to see that he’s still so active in Muay Thai.

There were nine bouts in total, six Muay Thai and three boxing. All bouts consisted of three rounds, with an extra round if required. I assume that this was for the purpose of keeping it interesting and action-packed, much like Thai Fight. As the first Thai fighter approached the ring, the stands erupted with cheers from his fellow inmates. The atmosphere of a crowd full of prisoners cheering for one of their own really is something to behold. He had a tattoo of a pair of boxing gloves on the right of his chest, and ‘KP’ (Khlong Phrem) shaved into the back of his head. He opened the show by performing a significantly long and beautiful ram muay, much to the applause and appreciation of everyone watching. Before the fight had even started, he was giving a great display of skill and balance (as well as cockiness), all while sporting a cheeky grin on his face. He was clearly very, very confident. That confidence continued into and throughout the fight that followed, and he out-classed his Scottish opponent, winning the fight by decision. Many of the fights that followed continued in the same fashion, and most of the Khlong Prem fighters overcame their foreign opponents, who were from various countries, including Japan, England, Ireland, Italy and the USA. However, two of the foreign contenders managed to defeat their opponents and take the Prison Fight belts home, one in a Muay Thai bout and one in a boxing bout, both winning on points. While the foreign challengers may not have been able to secure the majority of the wins, they showed a great deal of heart. How many fighters would be willing to go into a high-security Bangkok prison and go up against against one of the inmates? Regardless of their results, they’d all taken part in something quite special.

One of those fighters was Mark Sayer from Sitsongpeenong. I’d previously met Mark while training in Chiang Mai a couple of years ago, before I had even begun fighting. It’s quite amazing to see where our paths have led us since, and it makes me happy for them to have crossed again. When I asked Mark if the idea of fighting an inmate bothered him at all, he replied “yes, but not for the reasons you might expect”. He noted that there were some feelings of ambiguity surrounding the fight, describing the “appreciation from the crowd”, but mentioning that he felt conflicted by his impression that “the crowd is a bunch of people who quite possibly deserve to be behind bars”. He also pointed out that although the idea of Prison Fight sounds “a little shady”, it was actually “one of the most well-run fights in Thailand that [he’d] ever been to”.

Mark and his opponent at the press conference before the fight
(photo from https://www.facebook.com/prisonfight).

While watching the event, it was clear to see that Prison Fight was providing something valuable to Khlong Prem’s inmates. Prison Fight’s official website states that ‘the ultimate aim is to promote sport among prisoners and to help them quit taking drugs for better social adaptation in the future’. While giving any kind of privilege to convicted criminals may understandably stir controversy amongst some, I believe that it is ultimately a beneficial operation. The hellish conditions of Bangkok prisons are well-documented, and a prison sentence should provide rehabilitation rather than punishment alone, and Prison Fight is an example of that. Working with the Department of Corrections, it provides training equipment, financial remuneration, and most importantly, something positive and productive for inmates to focus on. Taking part in an event like this can help prisoners to feel that they’re part of something, and this can provide distraction from the rife drug-culture and harsh conditions, along with motivation to do something better for themselves.

This is not the first time that Thai prisoners have been given the opportunity to ‘battle for freedom’. Female inmate, Samson Sor. Siriporn (Siriporn Thaweesuk), literally fought her way out of prison in 2007.

After being sentenced to ten years for drug charges, she took up boxing, reportedly to protect herself from other inmates. Eventually, it provided her with much more than that. She too, fought in Khlong Prem Prison, which was eventually the ticket to her release. Her first bout there was in 2006, when she fought Nanako Kikuchi for the WBC straw-weight title. On that occasion, she lost by unanimous decision. However, she returned in April 2007 to fight Ayako Miyano for the vacant WBC light-flyweight title. This time, the tables had turned, with the unanimous decision going to her, and she became the first Thai inmate to earn a WBC title. After serving all but three years of her sentence, she was granted early parole, and the opportunity to travel to defend her belt. She’s since continued to fight after her release, last competing in May this year. Her story is nothing short of inspirational, and she has been praised as a ‘changed woman’, who has turned her life around for the better with the help of boxing. Without that opportunity, her life may have been very different. Siriporn’s story was made into a documentary called ‘Boxing Behind Bars’, the trailer for which can be seen here:

I’ve heard mixed opinions on Prison Fight, with some even suggesting that it’s exploiting the Thai prisoners. However, I should note that those opinions came from people who hadn’t attended the show. While I can see why it may seem that way on the surface, once you see it for yourself, it appears very different. This is not a ‘fight club’ where foreigners can fight prisoners just for the novelty of it. This is a very well put-together event where legitimate Thai fighters who also happen to be prisoners are given a chance to put their skills to use and work towards something better. All in all, Prison Fight seems to be providing opportunities. While it’s a fairly new venture, with its first event in January this year, the promotion has promised more events in the future. With all of the harrowing accounts that we so often hear from Thai prisons, it’s great to see something positive happening behind those walls. Plus, it’s always fantastic to see yet another example of what Muay Thai can give to people.

I was unable to take photos inside, but following are from the Prison Fight Facebook Page. 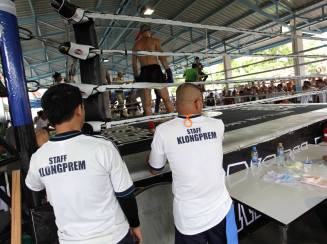 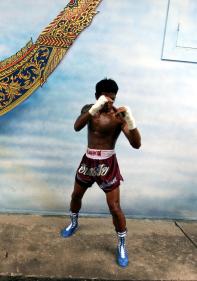 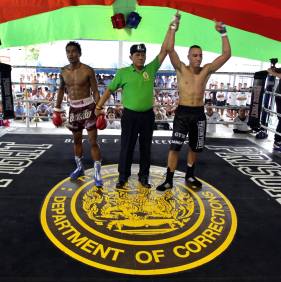 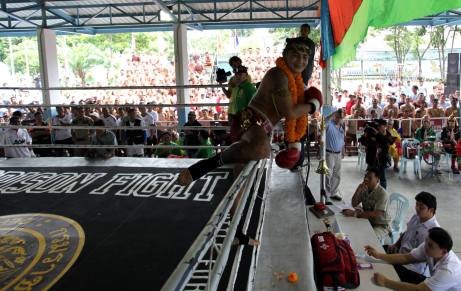 6 thoughts on “PRISON FIGHT 4: BATTLE FOR FREEDOM AT KHLONG PREM”